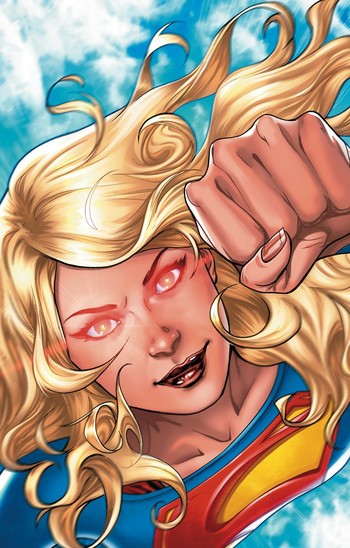 "Stop this. Let me help you. My father may have abandoned you... But I never will."
It's time to finalize our agreement. Superman died. You came to us, looking to carry on the work your late cousin began. But your powers were gone. I said I'd help you restore them. I did. Now comes your end of the deal.
— Dr. Chase
Advertisement:

Supergirl is a 2016 comic book published by DC Comics as part of their DC Rebirth initiative and part of the Superman universe, written by Steve Orlando with art by Emanuela Luppacino and Brian Ching. It redefines Supergirl and her place in the New 52 universe after the events of The Final Days of Superman. It is also a direct sequel to Supergirl vol. 6, which ended with Kara Zor-El being depowered due to unknown reasons, and takes inspiration from the TV-series Supergirl (2015).

Before dying in Super League, Superman entrusted Supergirl with protecting Earth. After her cousin's death, Kara Zor-El turns to the shadowy organization known as the DEO (Department of Extranormal Operations) to restore her lost powers once and for all as she ponders her place on Earth and wonders if she truly belongs on Krypton. But as a fateful experiment sends her rocketing toward the sun, disaster strikes at home in the form of the lost Kryptonian werewolf Lar-On!

Supergirl vol. 7 proper starts out right after the Rebirth issue with the Reign of the Cyborg Supermen story arc. Supergirl is having trouble adjusting to life on Earth and would rather be back on Krypton. The sudden return of Cyborg Superman and his offer to bring Krypton back will complicate matters even more so.

"Kara Danvers" is a tool for you to walk amongst the people you protect. I accept you on Earth, Supergirl. I believe in your potential. But I do not trust you. Not yet. But through Eliza, Jeremiah. Through your life as Kara, I hope you find your place. And my trust.