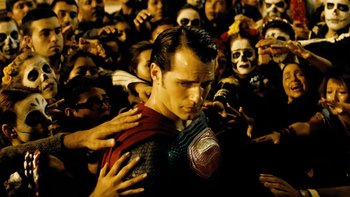 "Hands above the waist, please."
"They can be a great people, Kal-El; they wish to be. They only lack the light to show the way. For this reason above all, their capacity for good, I have sent them you... my only son."
— Jor-El, Superman (1978)
Advertisement:

Humans Are Special, so many nonhuman superpowered people want to destroy us. Unfortunately, humans are also Puny Earthlings, and would be completely screwed except for other nonhumans protecting us.

Humans are almost always Muggles; occasionally Badass Normals, but very rarely stand a chance against all the evil that is out there. Evil aliens? Interdimensional Big Bads? Intergalactic Empires? Eldritch Abominations?, Evil Wizards? Demons and other "evil races"? Other humans? You name it.

Humans are simply outmatched by all the dangers that are out there, and need the help of superpowered or otherwise superior species to protect themselves from evil; no matter how much they train or how much technology they have, they simply don't stand a chance against their enemies.

Thankfully, there are special/superpowered nonhumans out there willing to defend humanity from threats that they wouldn't otherwise stand a chance at fighting. Usually these heroic aliens are the Last of Their Kind or agents of an Intergalactic Federation and are the only ones willing/able to protect humanity. Aliens may also protect humans from themselves if Humans Are Warriors or to invoke a Green Aesop. This may lead to Takes One to Kill One when the heroic "alien" is the only thing that can stop his fellow, but evil, "aliens".

This trope can raise Fridge Logic issues if the defenders of humanity are depicted as having just recently begun to take on this responsibility, as it begs the question of how we'd managed to survive prior to that.

Contrast Humanity Is Superior, Humanity Is Advanced and Muggles Do It Better, where we can do everything superpowered aliens can do, but with science and technology instead. Compare Superior Species and Humans Are Morons. Can overlap with Benevolent Alien Invasion. Occasionally, the role of the benevolent aliens can be assumed by angels or other supernatural beings.

Please do not confuse this with Human Aliens, although overlapping is possible. Also not an inversion of Mars Needs Women.

Just as Darkseid begins his conquest of Earth, the forces of New Genesis come to save the day.

Just as Darkseid begins his conquest of Earth, the forces of New Genesis come to save the day.