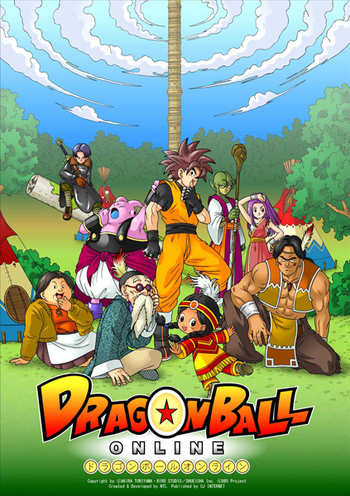 Dragon Ball Online was an MMO by Korean developer, NetMarble. The story was mostly written by director Koji Takamiya, and the project was approved and overseen by Akira Toriyama.

The story is set in the Age 1000, 216 years after Goku went to train with Uub at the end of Dragon Ball Z. Over this time many unforeseen changes have occurred in the universe. The Earth is now home to three new races: the Majin, the Namekians, and the Yardratians. The Majin are known to be the children of Majin Buu while the Namekians were forced to, once again, flee from their home planet due to unknown circumstances and take refuge on the Earth. Parts of the Earth have been terraformed to resemble that of Namek to make the Namekians feel more at home.

Two conflicts fuel the story. The first is with an organization known as the Red Pants Army, which seems to be a recreation of the Red Ribbon Army, and the second is a mysterious force known only as the Time Breakers. The Time Breakers' motives are attempting to go back through the history of the Earth and alter all of the major events involving Goku, with the goal of either brainwashing him or stealing his DNA.

The Time Breakers' meddling with time has caused a number of time rifts to open up all over the planet Earth. The character you play as is from an unknown Age that was unwillingly pulled into one of these time rifts and ends up in the Age 761 at the Kame House where you witness an encounter between Trunks and the Time Breakers. Trunks then takes you to the Age 1000 where you and he together try to preserve the Earth's history either by way of going through the time rifts or with the use of his Time Machine.

As NetMarble only had the rights to the manga version, as well as the Toei character of Bardock, Dragon Ball Online completely ignores the events of Dragon Ball GT.

The game was eventually shut down; the Korean servers went offline on September 26, 2013, with the Taiwanese and Hong Kong versions joining it on October 31.

After the shutdown, some groups of dedicated fans began making a reproduction of the missing data and setting up custom servers, essentially creating an updated Fan Remake to be titled Dragon Ball Online: Global and Dragon Ball Online: Revelations. Their progresses can be viewed here

. The storyline established in the game got kind of revisited in the 2015 video game Dragon Ball Xenoverse.