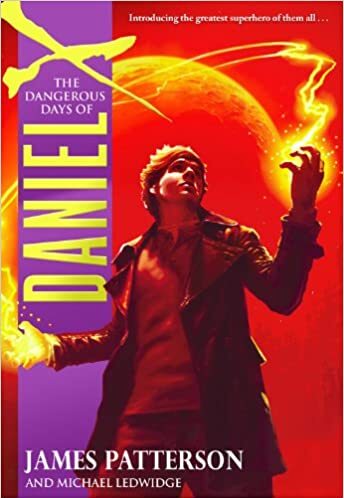 The Dangerous Days of Daniel X is a novel by James Patterson and co-author Michael Ledwidge, written in the same vein as his Maximum Ride series. Patterson returns to the realm of Science Fiction in this novel. It was released on July 21, 2008.
Advertisement:

Daniel X, who has no other last name, has the best superpower ever: The power to create. He can create real objects, including people, with only his mind. In addition, he has super-speed (he outran a truck traveling at 100 miles per hour) and super-strength (he can flip a car in a somersault). He is also granted an extra long memory.

When he was 3 years old, Daniel's parents were brutally murdered by a praying mantis-like alien called the Prayer, who came in search of the List of Alien Outlaws on Earth. When Daniel's parents wouldn't hand it over, the Prayer killed them. Daniel survived only by transforming into a tick and grasping onto the Prayer's dreadlock hair as he fled from the burning house. After he lost his grip on the Prayer and fell off, Daniel vowed to kill the Prayer for the death of his parents, and returned to the site when he was 13 to recover the List.

Twelve years after the murder of his parents, fifteen-year-old Daniel X has taken up the task of his parents as Defender of Earth.

There are five more books in the series, Watch the Skies, Demons and Druids, Game Over, Armageddon, and Lights Out. And like Patterson's earlier Maximum Ride series, Yen Press is adapting it into an OEL Manga by Seung Hui Kye.

Tropes associated with this piece of literature