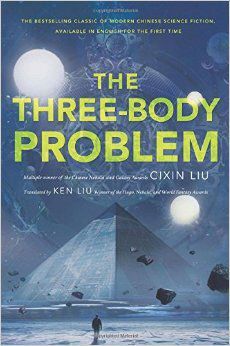 Engage in physics at your own risk.
"There's a strange contradiction revealed by the naivete and kindness demonstrated by humanity when faced with the universe: On Earth, humankind can step onto another continent, and without a thought, destroy the kindred civilizations found there through warfare and disease. But when they gaze up at the stars, they turn sentimental and believe that if extraterrestrial intelligences exist, they must be civilizations bound by universal, noble, moral constraints, as if cherishing and loving different forms of life are parts of a self-evident universal code of conduct."
— Liu Cixin
Advertisement:

The Three-Body Problem (三体) is a science fiction novel by Chinese author Liu Cixin. First serialized in 2006, it was published as a novel in 2008, and quickly became one of the most popular science fiction novels in China. An English translation by Ken Liu was published in 2014 and also became a breakout success, garnering a Nebula nomination in 2014 and winning the 2015 Best Novel Hugo. There are two sequels, The Dark Forest (黑暗森林) and Death's End (死神永生). Collectively, they are known as the Remembrance of Earth's Past (地球往事) trilogy, though readers usually refer to the entire trilogy with the name of the first book. The second book has been translated and published in 2015, and the third translation has been published in 2016.

A fourth book, The Redemption of Time (观想之宙), was published in 2011 and translated in 2019. Not written by Liu Cixin, it originated as an ambitious and hugely popular fanfiction that received the Approval of God, and is officially semi-canonical — readers may consider it the "true" conclusion to the trilogy or disregard it according to their preferences, as it radically reframes the themes of the trilogy to allow for a more hopeful ending.

In modern day China, Wang Miao is facing a problem: all the foremost physicists in his specialty, nanomaterials, are committing suicide, leaving behind extremely cryptic suicide notes. He's assigned to join a mysterious secret society that may have some answers, but keeps getting distracted by a revolutionary new MMORPG called "Three Body"...and also by the mysterious numbers that appear only in his vision, counting down to a date about fifty days away.

Many years into the past, Ye Wenjie is having a problem: though a brilliant physicist, she was branded a political dissident back during the Cultural Revolution, and was exiled to a lonely military station called Red Coast. However, Red Coast harbors goals far beyond the scopes of the earth, and Ye's personal struggles will have lasting impacts on the fate of the whole world...

A film adaptation of the first book is stuck in Development Hell. An animated TV adaptation is being developed by Chinese entertainment company Yoo Zoo Entertainment. A webtoon adaptation is in progress and the English translation may be found here

. A live-action TV adaptation is being developed by Netflix, with David Benioff & D.B. Weiss (Game of Thrones) and Alexander Woo (The Terror: Infamy) as showrunners.

"If I destroy you, what business is it of yours?"