Put Them All Out of My Misery 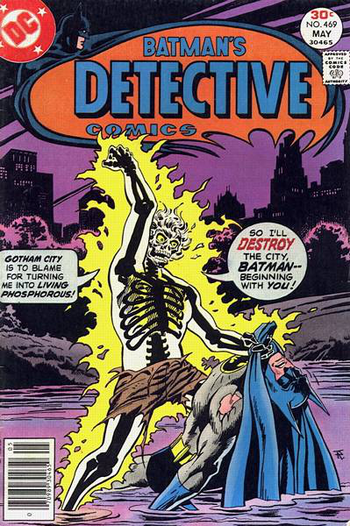 "Why should the world exist without me? That wouldn't be fair. If I die, we all die!"
— Kuja, Final Fantasy IX
Advertisement:

This is a villain who poses a credible threat to an entire community, is miserable, and blames it on everyone else. They rationally want to "Put Them All Out of Their Misery".

This character is not necessarily an Omnicidal Maniac, a nihilist who wants to destroy everything for the sake of destruction, nor a Woobie, Destroyer of Worlds who was mistreated, snaps, and lashes out on the world. This person is simply trying to cure an ailment, and are willing to go to any length to do it. While Put Them All Out Of My Misery villains are usually at least slightly sympathetic in the sense that at least their motive is understandable, they come off as jerks for putting their own misery ahead of others' safety.

There might be many reasons this villain believes he must cause trouble for others to heal himself:

On the Sliding Scale of Antagonist Vileness, this character is often a Card-Carrying Villain who is aware of the possible negative consequences of their intended actions but just does not care. Selfish and dispassionate, they may go about their plans for destruction with little more emotion than the heroes might when making a shopping list. Occasionally, the character is closer to a Non-Malicious Monster who doesn't really comprehend that their plans to alter the Earth's climate would cause not just inconvenience for others, but catastrophe.

Compare and contrast Woobie, Destroyer of Worlds, which is somewhat of the inverse of this trope yet may also overlap with it in certain cases. Note: Both this trope and that one can fall anywhere on the scale of villain threat. It's the scope of the story that defines the threat: They may be up against everyone in the town the story takes place in, or the entire world. Not the same as Well-Intentioned Extremist or Utopia Justifies the Means. While the villain may wish to destroy humanity for what they regard as noble or important ends, this fellow is ultimately driven by pure misanthropy and his own misery. The key to this trope is that they rationalize their actions due to self-pity, or contempt for the setting that they view as harmful.

Alas, Poor Villain may still apply, despite their jerkass tendencies, but only because Explaining the Villain Explains the Conflict.

Motive Rant, Cry for the Devil, and/or Strawman Has a Point may apply. If An Ice Person wishes to freeze the entire planet simply to heal himself, Fridge Logic may ensue. If hatred of an antagonist is their only motivation, see Best Served Cold.

For putting an actual wounded character "Out Of Its Misery", see Mercy Kill. Which this character may think they're doing.

In the Evil Ending, Delsin's actions reflect back on him and he is banished from his tribe for them. He does not react well.

Alternative Title(s): Put Them All Out Of Their Misery

In the Evil Ending, Delsin's actions reflect back on him and he is banished from his tribe for them. He does not react well.