Fanfic / A Storm of Chaos: A Doctor Whooves Adventure 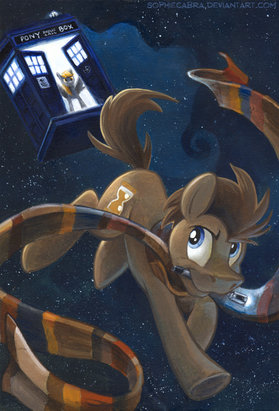 The 10th Doctor jumping into space... wearing a silly scarf

A Storm of Chaos

is a Doctor Who and My Little Pony: Friendship Is Magic crossover, which takes a different route from the typical Doctor-turned-to-pony setup used by most other authors and stories. In this case, the Doctor comes from the planet Gallopfrey, is the last of the Time Chargers, and the primitive world he's had his long-standing fascination with is Equestria. That said, while the backstory is a bit different than most versions of the crossover, most of the main pillars of Doctor Whooves fannon are still in place. It's still a pony version of the Tenth Doctor, and his companion is still Derpy Hooves, and they still go on typical adventures through time and space, but the Doctor comes at it with a different perspective than found in, say, Doctor Whooves and Assistant.

The story starts at a point between seasons 2 and 3 of Friendship is Magic. Discord's statue has disappeared, and Princess Celestia calls upon the Doctor to get to the bottom of it, due to certain evidence that it's something for him to take care of rather than the local heroes. While he and Derpy investigate, the Doctor's preoccupation worsens as he comes across some familiar Gallopfreyan technology and even more hidden dangers. The more and more they dig, the more disturbing these revelations become. They should, however, be fine, so long as they beware... the drums!

is the (still incomplete) sequel story.

, a short collection of one shots set in the same universe, detailing past encounters Celestia and Luna have had with various regenerations of the Doctor. And also If It Can Be Remembered

, a quick one shot that has this Doctor meet the canon Doctor's 11th incarnation, Time Crash style.

A (so far) final story in this continuity is Universes Apart

, which takes place a couple of months after the Season 4 battle against Lord Tirek, and brings the Doctor and Derpy into the universe of Equestria Girls.