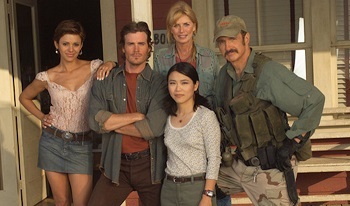 This TV series from the Tremors franchise, directly continues on from Tremors 3: Back to Perfection.

A new character, Tyler Reed, buys the Desert Jack Graboid Tour business and finds himself unintentionally partnering up with Burt Gummer, who has semi-officially become a go-to-guy for the government when Graboids are spotted in America. However, it turns out Perfection has some new monsters of its own crawling around, thanks to an abandoned governmental research lab and a mutagenic compound called "Mixmaster".