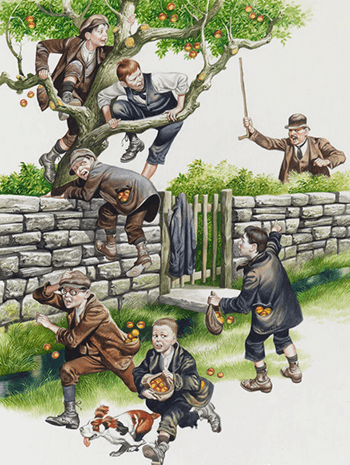 "I never run around in the bushes in a ski mask when I'm breaking in some place. Somebody catches you, what are you gonna say? You wanna look like a legitimate visitor until the very last minute. If you can't look legit, confused works almost as well. Maybe you get a soda from the fridge or a yogurt. If you're caught, you just act confused and apologize like crazy for taking the yogurt, nothing could be more innocent."
— Michael Westen, "Pilot", Burn Notice
Advertisement:

Taking someone else's food in secret is petty and it's nothing nice, but it's not a serious crime either. This trope is about casually stealing food for no particular reason, just because the character considers it fun, entertaining, a good prank or perhaps a proper revenge. Some do it to relieve boredom. And as a bonus they can get some delicious food.

It's not quite as rude or intimidating as stealing food from someone's plate right in front of their very eyes, but it's still pretty rude and generally frowned upon. Daring characters will however do it because of the thrill and excitement. If they're caught, the punishment isn't very severe. If the character steals from their friends, siblings or roommates, they're likely to be told off or they might argue about whose food it really was and why they did it, but that's about it. It can lead to Lost Food Grievance.

Another reason to steal food from others is Evil Is Petty. It's not a major act of villainy, but extremely annoying.

Scrumping is an Internal Subtrope for children, teens or young adults who steal fruit from trees in their neighbours' orchards and gardens, traditionally apples or pears. It's considered a childish prank at worst, and it has an air of old-fashioned wholesomeness. The reason is that children never take a lot and they usually eat the fruit right away. So such fresh food and exercise benefit their health.

Sister Trope to Enemy Eats Your Lunch which is about eating someone else's food right in front of them to assert dominance or intimidate opponents. Compare to Roguish Poacher. Contrast to Justified Criminal who steals out of necessity to feed themselves or their family. A character who does this a lot may have Sticky Fingers. Literally