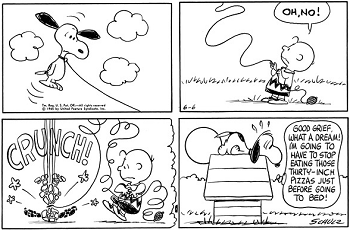 "Why do you doubt your senses?"
"Because," said Scrooge, "a little thing affects them. A slight disorder of the stomach makes them cheats. You may be an undigested bit of beef, a blot of mustard, a crumb of cheese, a fragment of an underdone potato. There's more of gravy than of grave about you, whatever you are!"
— A Christmas Carol
Advertisement:

In media, eating food can give a character nightmares. Whether it's because the food was eaten in excess or there's something special about the food in all, the character will suffer from bad dreams — sometimes featuring the food somehow.

It's also common for characters deep in denial to Discuss this trope in order to reject the idea that some obvious symbolism in their dream (for example, a Homoerotic or Recurring Dream) actually means anything, or (as with Scrooge in the page quote) that something fantastical is actually happening in real life.

A variant of the Mushroom Samba commonly found in sitcoms and cartoons. Humor using this trope is often combined with No More for Me, as the dreamer doesn't want it to happen again. Despite the superficially similar name, probably won't take you to an Acid-Trip Dimension — different kind of acid, for one thing. Not to be confused with Nutritional Nightmare. Compare Death by Gluttony, The Food Poisoning Incident, and Food Coma for other bad things that can happen to characters who eat too much.