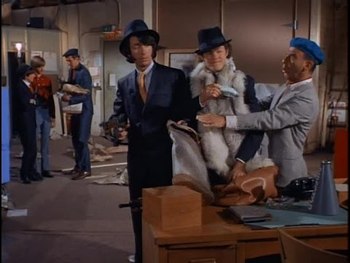 The Monkees rehearse for their big scene: a real bank robbery!
"We had a problem, we couldn't get a permit in New York City to open a shoe store on short notice merely to sell 500 pairs of shoes over a couple of days. But we could get a film permit quickly, so we did, then put a fake camera on a tripod outside and a sign indicating we were shooting locations for our film The Making of a Shoe Store. We sold all the shoes by the end of the day."
— Kenneth Cole describing the origins of his shoe store, Kenneth Cole Productions.
Advertisement:

An evil subtrope where a villain pretends to direct a TV show or film to cover up an evil plan. This has many characteristics in which it seems almost like a Take That! at the TV executives, but usually, it provides an interesting backdrop that can both easily explain away how there's no police suspicion of a crime, and provide a way to trick an innocent bystander into some criminal scheme, again without suspicion.

This can probably also apply to fake directing of media other than television or film, but there haven't yet been any examples yet of using a fake radio program or a video game as a cover-up for crimes in fiction, likely due to the ease of pretending that a crime is actually a scene from a movie or TV show. However, sometimes the villain will explain that It's for a Book.

As per a reason for the hero to get involved in the plot, it is virtually guaranteed that when a villain is causing crimes behind the façade of a nonexistent movie, the part of the criminal in said movie will often fall to the hero of the show, likely causing him having to clear his own name of a crime that he or she didn't know was actually a crime. Or in the other likely scenario, he or she is cast as the main actor/actress in the movie, and the villain tries to kill him or her off with a Death Trap disguised as various accidents or stunts.

Closely related to All Part of the Show. Contrast You Just Ruined the Shot, in which an apparent crime actually is just part of a film shoot. Sister Trope to It's for a Book and We Were Rehearsing a Play.