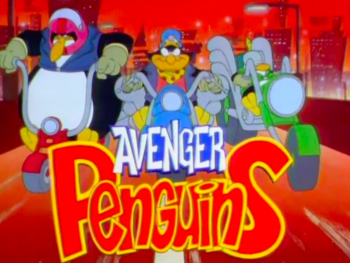 Penguins, bike up!
Created by Cosgrove Hall and Granada Television in 1993 and lasting for two seasons, Avenger Penguins was made as an Affectionate Parody of the Teenage Mutant Samurai Wombats trope, but with a British spin on it.
Advertisement:

It revolved around a trio of motorcycling penguins — Marlon, the brash leader, Rocky, a large penguin lacking in brains, and Bluey, a small penguin that spoke in a nearly indechiperable language. When they weren't challenging the 'Stink Brothers' or hanging out at their favourite ice cream joint, they were trying to stop evil genius Caractacus P Doom (no relation), along with his henchman Harry Slime, from trying to Take Over the World.

This series has a distinction as being the last Cosgrove Hall production to be animated with traditional ink-and-paint methods. From Fantomcat onwards, the studio would use computers for the ink-and-paint process, with the animation drawings scanned in beforehand and then digitally coloured using Toon Boom software.