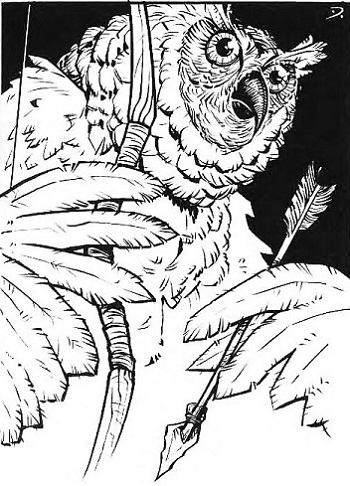 "Hey, I'm trying to pass the potatoes! My forelimbs are as useless as yours!"
— A T. Rex, The Far Side
Advertisement:

You may have noticed that many non-primate animals have extremely un-humanlike limbs. They may have wings, they may have fins, they may have claws like a lobster or long grappling hooks like a sloth or hooves like a cow.

But because Most Animators Are Human, they have a tendency to fall back on making the very different anatomy of animal characters — even those who aren't, strictly speaking, anthropomorphic — do things they'd be physically incapable of in order to closely mimic human actions. Therefore, every animal forelimb, no matter how little it resembles a human hand, is prehensile.

The Trope Namers are all the otherwise non-anthro cartoon birds who can hold things in their primary wing feathers, such as Woodstock. The primary wing feathers sort of look like fingers, so naturally in cartoons they act like fingers. Not a heavily modified and specialized extension of their body covering (meaning that this makes as much sense as Prehensile Hair). This is less jarring when done with hawks and eagles as their wings are wider and their wing feather tips stick out. This version tends to go hand-in-hand (sorry) with Acrophobic Bird.

There is a variant of this trope in which thumbs appear on the front paws of many cats and dogs (and sometimes other animals) when grasping something or gesturing, but disappear when the front paws are just used for four-legged walking or otherwise in a default pose.

This variant is sometimes applied to characters with Fingerless Hands, characters who don't have (apparent) fingers.

Another variant is when bird characters can bend their wings forward like arms, something that is physically impossible in real life.

This is usually the very first step in a character/series' Anthropomorphic Shift. It's just easier for animators to draw a character playing the drums or baking cookies using the body motions based off human references. It takes a hell of a lot of dedication to avert this trope, as it involves having to stop and really think about how the heck a penguin could possibly manipulate a tuba.

Related to Tailfin Walking, where the fins of a sea animal which are clearly not designed for standing are used like legs.

See also Cartoony Eyes, Toothy Bird, Mouthy Bird, Anatomy Anomaly, and Invisible Anatomy. Compare the far more common Humanlike Hand Anatomy, which is when the artist just draws the animal with hands instead of paws/hooves/wings to begin with. For, shall we say, a less family friendly human-like anatomical modification of non-humanlike animals, see Non-Mammal Mammaries...