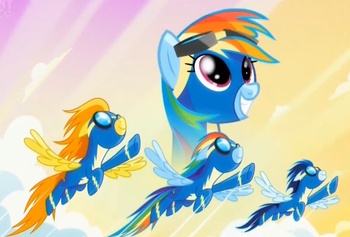 Rainbow Dash is set to help the Wonderbolts as part of the Wonderbolts Reserves, happily telling Scootaloo that she's looking forward to it. Just then, Spitfire flies down from above to inform Rainbow Dash that a spot opened up on the team. As such, not only will Dash be flying with the Wonderbolts, she's now an official member. Rainbow ecstatically prepares to head off to Wonderbolts HQ, where Spitfire starts introducing her to the rules and regulations. Rainbow enthusiastically puts on a Wonderbolt uniform, preparing to make a good first impression. But, as she leaves the barracks, she forgets to check for other flyers as they come down the runway. Rainbow leaps out of the way, but smashes headfirst into a garbage can. The other Wonderbolts immediately saddle her with the nickname "Rainbow Crash," the same nickname that Rainbow was bullied with in flight school.

Throughout practice for the show, the other Wonderbolts continue to refer to Rainbow Dash as "Rainbow Crash," breaking Dash's concentration and causing her to mess up the routine. Afterwards, Rainbow is saddled with cleaning the entire compound by herself, since she was the worst flyer that day. Rainbow, dejected that her first day went so badly, heads home to a surprise party thrown by the Mane Six and the Cutie Mark Crusaders. While she reveals what happened, the Mane Six encourage Rainbow Dash not to let a bad first day sour her whole time with the Wonderbolts, and to think of them like the Mane Six; a team. Rainbow takes this advice, but starts applying traits of the rest of her friends around the Wonderbolts instead of trying to be herself. The Wonderbolts all find this behavior strange or annoying, and continue to refer to her as "Rainbow Crash," even embroidering a patch with "Rainbow Crash" into a Wonderbolt jacket for her. Rainbow takes this badly, thinking she needs to do something unforgettable in the routine at the show, or else be stuck with her nickname forever.

Before the show begins, Rainbow Dash takes Scootaloo aside, telling her to kick a storm cloud in Dash's way at just the right time, letting Rainbow fly through a thunderbolt for a grand entrance. As the show begins, Pinkie Pie gets cotton candy while the Wonderbolts, Dash included, perform their aerial stunts. The routine goes well until the end, where Dash breaks formation to head towards the thundercloud. However, Dash misjudges the distance, and ends up spectacularly crashing, including smashing through Pinkie's cotton candy. After Dash is patched up, Spitfire incredulously demands to know why Dash broke formation. Rainbow admits that she's caused nothing but trouble, and says that maybe she's not Wonderbolt material after all. Soarin counters that she's a great flyer with Fleetfoot adding on how Rainbow has saved Equestria repeatedly, and the Wonderbolts admit that all of them have embarrassing nicknames, many from a terrible experience on their first day. However, Spitfire says that she needs to learn how to act as part of a team without being a showoff. Spitfire lets Rainbow Dash stay in the Wonderbolts... but, as punishment for breaking formation, Rainbow is on cleaning duty probation for a month.

That night, as Rainbow cleans up the show grounds by herself, the Mane Six and CMC come over to try and console her, only to find that she's in a good mood. After all, Dash says, now she's a Wonderbolt.