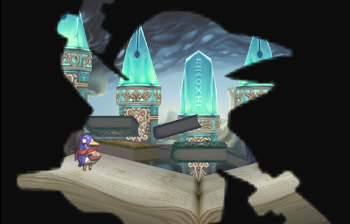 Prinny Iris Out to Boss Battle, dood.
[Homer and Lisa are editing a video of Flanders]
Homer: OK, from here we star-wipe to a glamor shot of Flanders paying his bills, then we star-wipe to Flanders brushing his—
Lisa: Dad, there are other wipes besides star-wipes!
Homer: Why eat hamburger when you can have steak?
Lisa: I'm taking my name off this thing.
[the cartoon itself then star-wipes to the next scene...]
— The Simpsons, "Alone Again, Natura-Diddily"
Advertisement:

The use of unusual wipes, dissolves, or otherwise strange scene transitions. While most scene transitions try to avoid drawing attention, so as to focus the viewers' attention on the on-screen action, Idiosyncratic Wipes practically scream, "Hey! Look at me! Did you notice there's a new scene about to start?! Here it comes!"

Idiosyncratic Wipes can be employed for artistic or humorous effect, or just because they look cool. They can be used for only a few scenes, or they can be used for every scene transition, in which case they serve as a show's trademark.

A burning film effect is used before the fire part of Matt's initiation.

A burning film effect is used before the fire part of Matt's initiation.