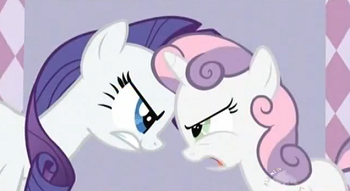 Gives a whole new meaning to locking horns.
Applejack: Being sisters is like... apple pie! You can have amazing apples, and you can have a wonderful crispy crust, but only together can you have a perfect apple pie.
Written by Cindy Morrow
Advertisement:

One morning, Rarity is awakened by Sweetie Belle's attempt at cooking her breakfast in bed. Before they can begin arguing, however, they're interrupted by their parents, who are going on vacation and leaving Sweetie Belle with Rarity in the interim. Rarity decides to make breakfast again since Sweetie Belle burnt it, but turns her away from most of the work, and the one task she gives Sweetie Belle (adding the garnish) ends up making a big mess. Determined to win Rarity's approval, Sweetie Belle tries various ways of making herself useful (doing the laundry, drawing her a picture, cleaning up around the shop), but they all end in disaster, too (Sweetie shrinks Rarity's favorite sweater, garnishes her drawing with rare gems Rarity needs for a big project, and straightens up the "organized chaos" of Rarity's "inspiration room"), and soon Rarity is on her last nerve.

When Sweetie Belle leaves, upset by her inability to spend time with her big sister, she runs into Apple Bloom, who suggests the two enter the Sisterhooves Social, an annual tag-team competition for sisters at the Sweet Apple Acres farm. Rarity refuses, however, and the tensions boiling over cause Sweetie Belle and Rarity to disown each other as sisters. An angry Sweetie Belle leaves the boutique and heads to Sweet Apple Acres, where she discovers the excellent relationship between Applejack and Apple Bloom. Applejack invites her to help with the chores, and Sweetie Belle enjoys herself immensely.

Back at Carousel Boutique, Rarity slowly begins to realize she misses her little sister more than she thought after finding little ways in which Sweetie Belle's mistakes paid off (her shrunken sweater fits Opalescence perfectly, and the neatly-organized cloth in the inspiration room inspires a new line of outfits). She finally starts to regret their argument after finding Sweetie Belle's heartwarming drawing of the two. When Rarity arrives at the farm, however, Sweetie Belle gives her the cold shoulder, announcing that she's "adopting" Applejack as her big sister, to everypony else's surprise and consternation. Rarity's attempts to convince Sweetie Belle to return backfire when the filly calls her out for wanting to do things that only Rarity wants; after Applejack points out that Rarity needs more give-and-take in her relation with Sweetie Belle, Rarity devises a plan to fix the problem.

Come the day of the Sisterhooves Social, Apple Bloom "gives" Applejack to Sweetie Belle (for "ONE. DAY.") to enter the contest. Applejack falls into the first obstacle but gamely continues the race while Covered in Mud, finishing the course with Sweetie Belle just strides behind Berry Punch and her sister. As they celebrate, however, Sweetie Belle discovers that "Applejack" was actually a mud-covered Rarity, who had arranged to swap places with Applejack in the mudhole.

Rarity and Sweetie Belle reconcile, and the two write a letter to Princess Celestia about having learned to compromise and have fun with one's siblings... only to begin arguing over the wording of the last sentence. Luckily, Spike is on hand to help them compromise.