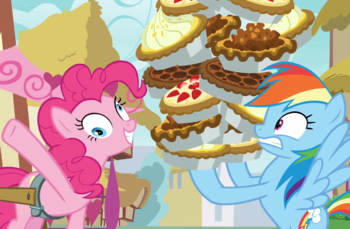 "It might sound crazy but it ain't no lie, baby pie pie pie..."
Pinkie Pie is busy baking a pie over at Sugar Cube Corner, explaining her method to Twilight Sparkle. The pie Pinkie is preparing is to celebrate Rainbow Dash's 73rd Wonderbolts training session, since she knows that Rainbow Dash can't get enough of her pies, and Pinkie enjoys making Rainbow happy.
Advertisement:

Pinkie takes the pie up to the Wonderbolt Academy and presents it to Rainbow Dash, cutting her a slice. Rainbow quickly distracts Pinkie and when she looks back, she's wiping crumbs from her face and compliments Pinkie on the pie. Pinkie offers her another slice but Rainbow instead takes the pie, saying she has other places she has to be and will eat it later. Proud of herself, Pinkie sets off, but suddenly notices that what looks like her pie is sitting atop a trash can being wheeled out by the janitor. She gives chase and questions the janitor if that was in fact the pie, but doesn't get an answer.

Pinkie returns to her sanctum underneath Sugar Cube Corner to ponder the implications of what she witnessed. She checks in her files of some recent pies she had baked for Rainbow Dash and tries to recall if she ever saw Rainbow take a bite of any of them. In every instance, Rainbow had done the same thing: briefly distract Pinkie, then upon looking back, the pie appeared to have been eaten. Deciding she doesn't know enough, Pinkie sets out to investigate.

She returns to the Wonderbolt Academy and questions the other members, who tell her they get monthly pie donations from an unknown source. Pinkie then pays a visit to Dr. Fauna, who has been treating Rainbow Dash's tortoise Tank for stomach problems and diagnoses it as sugar overload. Pinkie correlates the first instance of it with a pie she baked a week before. Dr. Fauna also shows Pinkie an x-ray that shows Tank had ingested a pie, directing her to Cheerilee, whose class hamster had shown similar symptoms. Cheerilee tells Pinkie that Rainbow Dash had given her class her half-birthday pie every year, which confirms Rainbow had been offloading Pinkie's pies without eating them.

Pinkie, now sure that Rainbow Dash has been lying to her, realizes Rainbow Dash doesn't enjoy eating pies and flips out. Meanwhile, Applejack pays a visit to Sugar Cube Corner and hears Pinkie's freakout before stumbling into the party planning sanctum. Pinkie explains her suspicion of Rainbow to Applejack and then imagines that Rainbow Dash has turned into a pie-hating monster with laser eyes. Applejack reassures her that isn't the case and offers her a tub of apples with which to make pies. Pinkie decides to make enough pies to either get Dash to confess or to catch her red-hoofed ditching them.

Pinkie Pie goes to Rainbow Dash's house and offers her a "Wake Your Friends Up Day" pie, which Rainbow quickly disposes of by making Pinkie Pie sneeze then throwing it down a chute to Tank. Then Pinkie meets Dash at the Wonderbolt Academy and offers her a pie for her 74th training session. Rainbow seems to be trying to distract Pinkie as usual, but this time Pinkie gets plowed into by Spitfire because she was standing on the runway; Rainbow takes the opportunity to once again chuck the unwanted pastry.

Pinkie's next strategy is to stand on a huge tower of pies and attempts to make Rainbow Dash eat all of them in order to get her down; but Rainbow simply flies to the top and picks her up, after which the tower falls on top of Pinkie. As "gratitude" for being saved, Pinkie gives Rainbow a whole bunch of pies, but Rainbow manages to get the Ponyville foals to take them off her hooves and pretends to have eaten one in the ensuing rush. Pinkie, now furious, disheveled, and fairly insane, has a pie gathering for the whole town and ambushes Rainbow there, demanding she eat hers, refusing to blink until she does. Rainbow stalls until Pinkie is finally forced to blink, at which point she quickly ties the pie to a balloon and gets rid of it out of Pinkie's sight.

Pinkie finally breaks and openly accuses Dash of betraying her. Rainbow Dash tries to deny it but the balloon she used to ditch her most recent pie drops it on Pinkie's head, confirming once and for all Rainbow had been lying. Rainbow then tries to make up excuses but Pinkie won't have it, storming off back to Sugar Cube Corner. Rainbow Dash goes back to Twilight's castle to try and work out a solution with Applejack and Twilight, but doesn't get much sympathy from them for lying. Suddenly, she is hit with inspiration and sets out to right her wrong.

Meanwhile, Pinkie Pie is napping at Sugar Cube Corner when she is awoken by an awful stench. She looks out her window and sees Rainbow Dash, Twilight, and Applejack. Dash admits she was in the wrong and shows her a large pie she "baked": a disgusting-looking gray and green mess that was the source of the foul odor. Rainbow says she'll eat the "pie" in order to show how sorry she is and to make up for ditching all of Pinkie's previous pies. Pinkie spares Rainbow from torturing herself and accepts her apology, realizing why Rainbow had been faking all this time: what Rainbow had wanted was seeing Pinkie overjoyed at how much she seemingly enjoyed eating her pies. The two friends make up and hug it out, even though Rainbow would prefer if Pinkie hugged a little less tight.