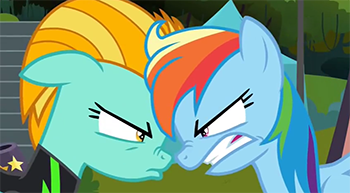 The Dust hasn't settled.
"Lightning Dust! I should've known you were the brains behind a crazy idea like the Washouts! Or should I say, 'lack of brains'!"
— Rainbow Dash
Advertisement:

At the show, Dash finds the pegasi trio of Washouts do a number of death-defying stunts, far more dangerous than anything the Wonderbolts do, all of which excite the crowd and Scootaloo even more. Scootaloo drags Dash to meet the Washouts after the show, where they meet Short Fuse and Rolling Thunder before meeting their leader: Lightning Dust.

Lightning Dust and Rainbow Dash greet each other coldly, though back off enough to explain what happened since Lightning was kicked out of the Wonderbolts. She decided to form the Washouts with other Wonderbolts rejects and tour Equestria. Much to Dash's concern, Lightning Dust suggests that even Scootaloo could be a Washout even if she can't fly. Scootaloo is enthralled by the opportunity, as she would otherwise never get the fame and attention without being able to fly. To try to sway Scootaloo away from the Washouts, Dash takes her to Spitfire, who tries to scare Scootaloo about being injured for life if any of the stunts go awry.

After returning Scootaloo back to Ponyville, thinking that Spitfire's speech had convinced Scootaloo to stay away from the Washouts, Dash learns that Scootaloo went right back to the Washouts and joined the team just as they are about to start another show. Rainbow Dash meets up with Twilight and talks about Scootaloo and her safety. Twilight gives Rainbow Dash some advice, saying that she's not in control of Scootaloo's actions, only hers and should be a better role model to her than making her feel like she won't accomplish anything. Lightning Dust takes Scootaloo to the stunt she has set up for her, having strapped her scooter to a giant rocket for her to jump over twenty flaming wagons. Scootaloo suddenly has a change of heart, but Lightning Dust forces her to go through with it, launching the rocket. Scootaloo is sent sailing over the wagons, but Rainbow Dash shows up in time before the rocket goes too far; a rope trailing on the rocket snags Lightning Dust and drags her off with it. Back on the ground, Scootaloo thanks Dash for saving her and apologizes to her for not listening to her about Lightning Dust and the Washouts and Rainbow Dash apologizes for making Scootaloo feel like she will never be as great as she is because of her flying disability.

Later, Scootaloo is pleased to see that Rainbow Dash has started a Scootaloo Fan Club to show her how much she is also appreciated.

You can't get any hammier than this.

You can't get any hammier than this.