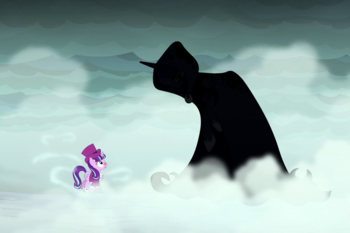 Enjoy Hearth's Warming Eve or else...
Everypony loves this cursed holiday
But would they be better off with it out of the way?
— Snowfall Frostnote As portrayed by Starlight Glimmer
Written by Michael Vogel
Advertisement:

As Hearth's Warming Eve approaches, the ponies of Ponyville gather in Twilight's castle, decorating it for a grand celebration of the holiday. However, Starlight Glimmer has decided to skip the party, saying that she doesn't think the holiday is all that special. To help convince her otherwise, Twilight takes Starlight and Spike into her library to read Starlight an old story about a mare named Snowfall Frost.

Snowfall Frost was a pony who hated Hearth's Warming Eve, saying that ponies should spend all their time working for the betterment of Equestria, not believing the old legends of ponies coming together to stop the Windigos. After being interrupted from her spellwork one too many times, Snowfall sends her assistant Snow Dash home early to avoid any more distractions. When she still can't concentrate due to the celebrations outside, Snowfall elects to create a spell that will cause all of Equestria to forget about Hearth's Warming Eve. As she prepares to cast the spell, a spirit arises from her cauldron, introducing herself as the Spirit of Hearth's Warming Past. She shows Snowfall her own past, where Snowfall was quite happy to celebrate Hearth's Warming Eve with everypony else, until a cruel teacher named Flintheart told her that she was wasting her time. He repeats that Snowfall ought to be spending all of her time working for the betterment of Equestria, a lesson that Snowfall took to heart.

As she reappears back in her own chamber, Snowfall is greeted by the Spirit of Hearth's Warming Presents, who shows how happy and joyful that her assistant Snow Dash is, along with how much everypony is enjoying the holiday. The spirit says that the holiday isn't about gifts; it's about being with your friends. As the spirit leaves, Snowfall is surrounded by an ominous coat of ice, greeted by a taller, dark spirit; the Spirit of Hearth's Warming Yet to Come. That spirit shows Snowfall that forgetting Hearth's Warming Eve will cause all of Equestria to be overtaken by the Windigos, covering the land in eternal frost. Seeing the error of her ways, Snowfall Frost says that she hasn't yet cast the spell, and promises to understand the holiday better. She reappears in her chamber, and takes several gifts down to the same party that Snow Dash and her friends were holding. Snowfall admits that she was wrong, saying that what matters most in the holiday isn't the gifts, but the thought behind them. The ponies of the town welcome her to the party, with Snowfall Frost becoming the most charitable of all ponies around the holiday from that day forward.

As Twilight finishes the story, she invites Starlight down to the party that the rest of them will have. After some thought, Starlight decides to join in the festivities after all, having learned the same lesson that Snowfall Frost did: it's not the gifts, it's the thought behind them.

The residents of Ponyville prepare for Hearth's Warming Eve.

The residents of Ponyville prepare for Hearth's Warming Eve.