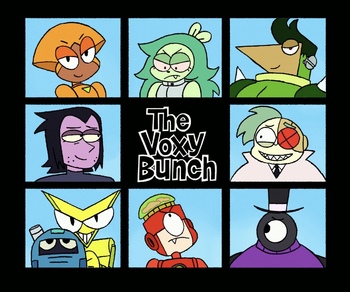 Even Evil Has Loved Ones: The Series.
"J.D.'s sitcom fantasy is filmed in front of a live Studio Audience."
— Scrubs
Advertisement:

An episode of a show which is not normally in the Sitcom genre that is framed with the tropes and conventions of that genre. A Laugh Track is pretty much required, and probably a Three Cameras format as well. The lighting scheme will often be much brighter and happier. It will also deal with usual sitcom plots such as having Dinner with the Boss or throwing in a mini-Very Special Episode for laughs.

Note that many of these shows, in a broader sense, are also sitcoms, but the subject of parody is specifically the older archetype of one. Sometimes overlaps with Parody Episode in those cases where it's a Whole-Plot Reference to a particular sitcom, and Subverted Sitcom when there's a darker or scarier reason for the show suddenly pivoting to a sitcom aesthetic.

Craig imagines an opening for a sitcom about his family, which is a homage to Family Matters.

Craig imagines an opening for a sitcom about his family, which is a homage to Family Matters.