Rin: You ready, Haru? Better say bye to your boyfriend.
Haru: He’s not my boyfriend. The pool and I are just friends. With benefits. 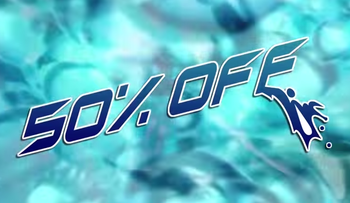 Because it's not quite Free!.
Advertisement:

An Abridged Series of Free! created by Octopimp and written by SparkyTheAndroid, 50% OFF is a little different than than usual; rather than full episodes of the show, episodes of the series are three-to-five-minutenote The time becomes more like eight-to-ten in later episodes shorts. The series covered most of Iwatobi Swim Club, but fell to the wayside before going on unofficial hiatus, and eventually being outright cancelled in 2020. The spoof as it currently stands ends on Episode 19.

It's well-known in the fan community for its extreme characterization, resulting in Thugisa. There are also swimming puns and lampshades abound and the show's popularity is now growing beyond the fan-base.

Has absolutely nothing to do with OFF.