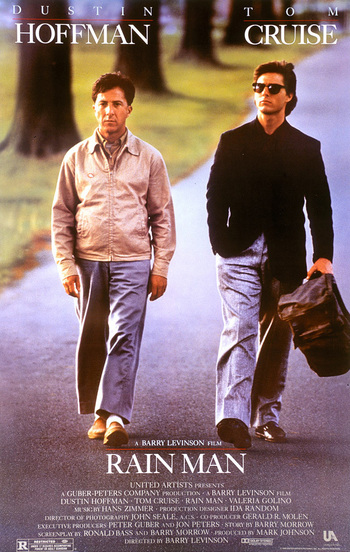 The Buddy Picture, Inverted, and one of the greatest Road Movies of all time.
Advertisement:

Rain Man is a 1988 Oscar-winning film by Barry Levinson, starring Dustin Hoffman and Tom Cruise. The main character is loosely based around real-life savant Kim Peek (1951-2009), who in reality had FG syndrome

, not autism (though nobody realized it until after he died).

Cruise plays Charlie Babbitt, who — being a luxury-car dealer in his mid-20s during the 1980s — is a self-centered, egotistical, foul-mouthed yuppie. Upon the death of his father, Charlie is told that instead of receiving a $3 million inheritance as he was expecting, he gets a convertible and some prize-winning rose bushes. This affront to Charlie's luxurious lifestyle will not be tolerated. After a little detective work, Charlie finds that the money is being sent to a mental institution in Cincinnati. It's only when he visits the hospital that Charlie finds the truth: the money is going to his previously unknown brother Raymond, who has severe autism.

Charlie decides to whisk (read: kidnap) Raymond away and meet with his attorneys in Los Angeles so he can get — in his view — what is rightfully his. Charlie discovers multiple things about Raymond, one being that no matter how much he screams and shouts Raymond does not and cannot change (he has to watch Jeopardy! and Wapner, has to have the syrup on the table before the pancakes arrive, etc.). The other is that Raymond has near perfect recall and mathematical skills to rival any calculator. Seeing this, it leads Charlie to use Raymond to help his own financial problems and (in an oft parodied / replicated scene) takes Raymond to Las Vegas to count cards.

The film's focus is on the bonding power of family and how when you take care of someone else it teaches you not to be so self-centered. Raymond can't change, but Charlie can, and does. It is also notable for its focus on an autistic character.

This film gives us the following examples: