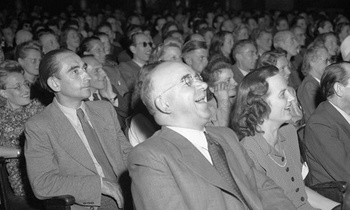 The laughers are all dead now.
"See? The laugh track tells you what's funny. You don't even need to think!"
— Robert Freeman, The Boondocks
Advertisement:

Closed-captioning for the humor-impaired.

In the early days of television, comedies were "traditionally" performed essentially as short plays in front of a live Studio Audience, broadcast live or with minimal editing (see Three Cameras). However, as television production grew more sophisticated in the late 1940s and early 1950s, there was at least a partial shift away from live performances to productions that were filmed movie-style, with a single camera and on a closed sound stage or on location. The latter gave the director more freedom in selecting shots and angles, as well as the luxury of multiple takes. However, there was no longer an audience to provide instant feedback on the humor.

The general opinion of the audience held by television executives then (and some would argue now) was very low. There was serious concern that without an audience to "prompt" the home viewer's responses, a comedy would fall flat. The solution was the creation of the Laugh Track (also known as "canned laughter") — an artificial audience that did nothing but react uproariously to anything and everything.

Naturally, within a few years of its introduction, it was abused and overused. Every punchline, no matter how lame or subtle, would receive the same tsunami of belly laughs from the virtual audience. It became epidemic, even intruding bizarrely into cartoons (The Flintstones and The Jetsons, anyone?). By the 1960s, it had become an annoying intrusion, hated but (in the minds of most producers) mandatory. In the 1970s, however, most sitcoms began to switch away from the single-camera, movie-style format and back to the multi-camera format with a studio audience providing real laughter, which producers found more pleasing because it had a better comic "rhythm" and helped them write better jokes. By the 1980s, the only hit that still regularly used a laugh track was M*A*S*H (which increasingly dispensed with the device toward the end of its run). And while the Turn of the Millennium saw a resurgence of single-camera comedies in the US, these were influenced by the new wave of British comedies of the 1990s, which omitted laugh tracks completely (leading to some Misplaced Nationalism). Some comedies resorted to the use of certain sound effects that served the same purpose, but as the focus of 2010s-era comedies shifted towards either dramatic or outrageous situations, laugh tracks have seen a decrease in use. They are sometimes Played for Horror in the Subverted Sitcom, though.

Although it may not seem so, laugh tracks were surprisingly sophisticated systems at the height of their use. Rather than being just simple recordings of a laughing audience, they were actually carefully generated and mixed, with such discrete components as "the guy who gets the joke early" and "housewife giggles" and "the one who didn't get the joke but is laughing anyway" all precisely blended and reblended to create the illusion of a real audience responding to the show. Up until the late 1970's, these were all the work of one company, owned by Charley Douglass, which used a mysterious machine of his own invention to create those imaginary audiences for hundreds of shows.

A history and analysis of the laugh track can be found on the web here.

The Onion is very fond of mocking

The term "laugh track" is often misapplied to shows that are filmed and later screened to an audience, whose responses are then recorded. This is inappropriate, though, because in these cases the laughter was a genuine response to the humor in the show, and was not pre-recorded... although it's not unheard of for supplemental canned laughter to be inserted afterwards. Sometimes the term is even applied to the existence of a Studio Audience. In fact, studio audience sitcoms tend to get accused of employing "laugh tracks" more than shows that actually do so, because a laugh track tends to be quieter and less noticeable than real live audience laughter. This situation led to many shows, such as Cheers to add a disclaimer either at the beginning or the end of a program: "(Program X) is filmed before a Live Studio Audience".

In some Latin American countries (Argentina, for example), the laugh track is replaced by a crew of off-screen people paid specifically to laugh on command whenever the comedic situation (presumably) merits a laugh; they are known as reidores; a senior laugher signals all the others when to laugh. In Mexico, the Chespirito programs, particularly El Chavo del ocho, had laugh tracks for most of their runs, but in later years this device was dropped, with a disclaimer proclaiming that it was done to respect the audience.

Note that even the shows that record laughter live from an audience (or show pre-recorded material to an audience and record that laughter) will edit, alter, or even add to the laughter in some way, even if (as in most cases) it's just to cover the transition between takes/scenes, using the same techniques used to add true canned laughter.

While some claim the reason for laugh tracks is Viewers Are Morons, in their defense laughing along with everyone else in a group is a very social phenomenon and watching TV can be a very solitary phenomenon. It's not polite to laugh at something that isn't funny, not everyone has a well defined sense of humor (and that doesn't mean they are a moron, either), so the cue can be helpful to some people. One other criticism of laughter tracks is that it creates an enforced No Fourth Wall scenario for every series that features one, continually reminding viewers that that are viewing a performance rather than allowing for immersion into the story and characters (see, for example, M*A*S*H). Another complaint is that if the fan videos that edit out the laugh tracks in sitcoms are anything to go by, the funny moments are only funny because of the laugh track itself, turning it into a comedy crutch.

Laugh tracks and other uses of recorded laughter can have one interesting benefit in terms of pacing a show. Similar to theater, when the audience laughs, the actors will often pause for the joke to "land" and for the audience to calm back down before continuing. This pause is beneficial in some cases because it prevents dialogue or important details from being missed if the audience is still laughing. However, the dialog sounds very strange without the laugh track, as the actors must deliver a line then pause for about five to ten seconds for the next one. It also changes the type of dialog one writes; a laugh track forces short, brief, quip-laden dialog. Without a laugh track, more natural dialog and more complex jokes can get the space to breathe.

Turn Off the TV

After Bernard falls into the laundry, canned laughter is heard and then cheering is heard at Nicole's quip. Then it's revealed that Jessica had left the TV on.

Turn Off the TV

After Bernard falls into the laundry, canned laughter is heard and then cheering is heard at Nicole's quip. Then it's revealed that Jessica had left the TV on.