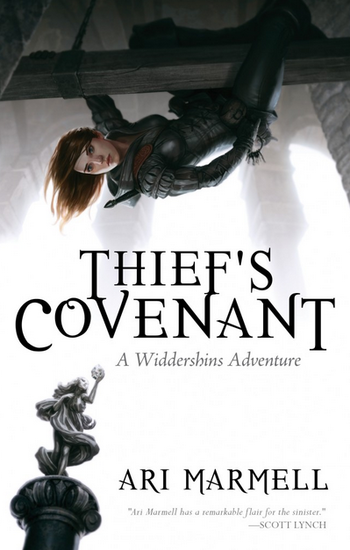 Widdershins Adventures is a series of Fantasy novels focusing around, well... the adventures of Widdershins, a seventeen year-old street-thief-turned-aristocrat-turned-master-criminal, in the Galicien city of Davillon. Once known as Adrienne Satti, she is the sole survivor of the cult of a foreign god, Olgun, who uses his powers to enhance her own physical abilities and alter probability in her favor. The first book, Thief's Covenant, was published in 2012. The second book, False Covenant, came out in 2012 as well, while the third book, Lost Covenant, came out in 2013, and the fourth and final book, Covenant's End, in 2015.
Advertisement:

Not to be confused with the vaguely Victorian-era Gaslamp Fantasy Widdershins.