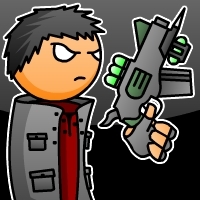 Versus Umbra is a video game developed by Arkuni in Adobe Flash released in 2011. It's a 2D shooter in which you control a playable character and shoot all foes. The game features lots of weapons and a perk system. There are four modes of play: