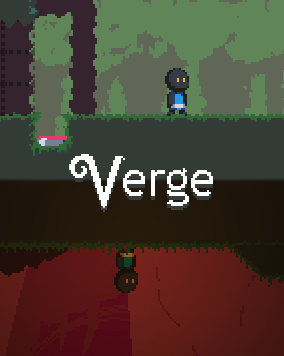 Enter the world where death is not the end
Advertisement:

Verge is a Puzzle Platformer from the makers of Depict1. Created in 2008, it was the winner of the Commonplace Book competition at the Tig Source forums

and got an updated flash version three years later.

You control a nameless boy who can't remember who or what he is. Tantalized by a mysterious angel-like figure, he explores the levels to solve puzzles, but will eventually die.

But dying isn't the end, and is in fact necessary to solve some puzzles. Dying places you on the bottom of the world, filled with water, and certain markers can restore you to spots above. Yet even in the land of the dead, one must be wary of those who would steal your soul...