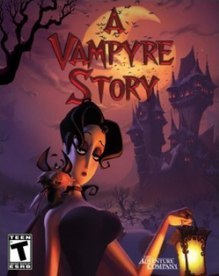 1895 (or maybe 1897), Draxylvania. Mona de Lafitte, a young, up-and-coming Parisian opera singer, is in dire straits — specifically, the disgustingly-clingy arms of one Shrowdy von Kiefer. The vampire Baron of Castle Warg, he has kidnapped Mona and placed her under a curse which is curiously identical to vampirism, but not, Mona adamantly maintains, actually vampirism. But one night, while Shrowdy is out collecting Mona's "wine" ("a salty-tasting merlot with an iron aftertaste," remarks her pet bat Froderick), a pair of vampire hunters happen across the greasy little turd and give Mona the light of hope. Now she has to use her wits (hopelessly inadequate), Froderick's help (if he can stop cracking wise), and her environment (now we're getting somewhere) to escape Draxylvania and return to Paris.

A Vampyre Story (yes, the 'y' is correct) is a point-and-click adventure game released at the end of 2008, starring Mona, an opera singer and new vampire, and Froderick, a small bat she pals around with, plus a creative cast of supernatural supporting characters (and a curious abundance of cops). Many of the employees of Autumn Moon Entertainment, the developers, used to work for Lucasarts, and some of the design sensibilities came along for the ride. Most obvious is the action coin interface-in addition to Curse of Monkey Island's Look-Talk-Touch, Mona has the option to transform into a bat to further use and abuse her environment. You can also "use" your sidekick Froderick, in the vein of a Lucasarts-era adventure gaming icon (hint: think long ears).