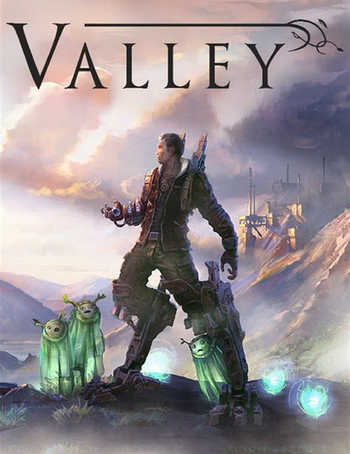 Valley is a first-person platforming game with some action elements, built on the Unity engine. It was developed and published by Blue Isle Studios and released in 2016.
Advertisement:

In it, you play an archaeologist on the hunt for a mysterious "Life Seed," a mythical artifact said to hold enough power to destroy the Earth. After being stranded in a mysterious valley in the Canadian Rockies, you uncover the ruins of an ancient civilization as well as the remains of American government bases. You also find an experimental "L.E.A.F. Suit" exoskeleton that gives you greater speed and jumping power, as well as control over a mysterious "amrita" energy that can give or take life. So armed, you explore the valley in search of the Life Seed and the rest of the valley's secrets.