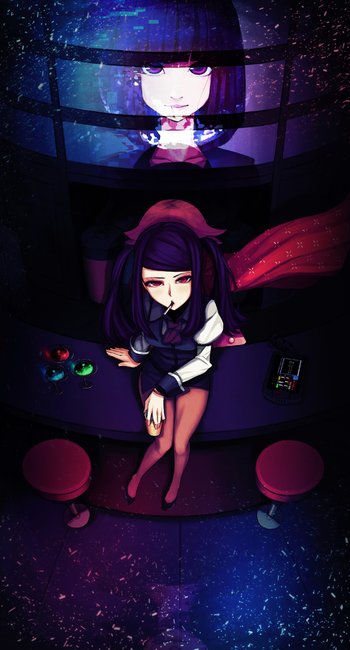 The year is 207X, and Glitch City is a cybernetic dystopia where rich corporations freely abuse the increasingly-desperate proletariat, violence rages unchecked in the streets and the corrupt White Knights freely oppress those they are meant to protect, even using infectious nanomachines to ensure that the people remain downtrodden. This, however, is not that story.

You are Jill, a woman trying to make ends meet in dystopia working as a bartender at the VA-11 building's Hall-A, more commonly known as Valhalla. It may be a seedy dive bar in a bad neighborhood, but despite (or because of) that, it manages to draw the most interesting patrons. Quench their thirst and you can hear their stories, make new friends and most importantly, make your rent for the month.

, which describes itself as "a booze 'em up about waifus, and post-dystopia life." It takes heavy inspiration from old PC-98 games, with a chiptune soundtrack and a distinctly retro anime art style. In lieu of dialogue choices, Jill must mix the correct drinks for her clients. What she serves them can change the conversation; adding more alcohol to get the client hammered may get juicier stories, or it may just make them leave if they're a lightweight. The goal is to make enough money to pay your various utilities, and of course, better service means a bigger paycheck. Despite the game's dark cyberpunk setting, its tone is mostly comedic with colorful characters and plenty of (sometimes crude) jokes, but also has its share of emotional moments and dark stories that remind the player what kind of place they live in.

The game was released for PC on June 21, 2016, with a PlayStation Vita release in 2017. Ports to the PlayStation 4 and Nintendo Switch were released in 2019.

A sequel, N1RV Ann-A, is in development and was planned for release in 2020, but has been delayed until further notice. It will be set in an artificial island, Saint Alicia, and feature a different bartender, Sam, who struggles to balance her responsibilities between motherhood and bartending.

The game later had a collaboration with the Girls' Frontline mobile strategy game, which was available on the English server by August 2019. The story is split into two sections: the GFL-centric stages which have a fusion setting taking place in a post-apocalyptic "Griffon City", and the bar stories, which function as a kind of side-story sequel to the original VA-11 HALL-A and take place in Glitch City. The two narratives, needless to say, turn out to not be wholly unrelated.