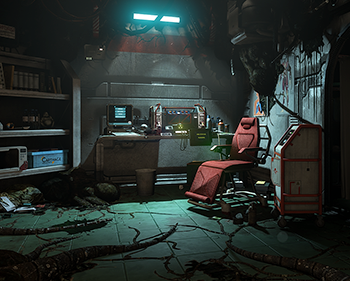 The Abandoned Laboratory is a common setting in Speculative Fiction. But when you place it into a video game, it becomes quite the tour of science gone horribly wrong.

Usually a task set out after finding rumors about a Mad Scientist. You decide to head to the Abandoned Laboratory, where you are greeted by hostile security units who do not want you to enter the deeper parts of the lab. They are often however no match for whatever lies below, whether it be discarded Super Soldier projects, sentient robots who plan to exterminate all life, or horrible masses of biological life which smell dinner. Often they are an evolutionary sort, starting out with rejected lifeforms and ending up as deadly beings which have exceeded the creator's ambitions and can more than easily kill the hero in a heartbeat. Card Keys are a common staple of these wretched labs. Often, logs will lie about, speaking of first pride and then terror of their author's scientific pursuits.

Along the way, as you travel across the lab, you will go from a relatively sanitary environment to one where it feels disgusting just stepping on the ground. Vats full of the specimens lie dormant or are deceased due to being failures (however, if they are less than human, expect them to break free to start munching on something), bits of Techno Wreckage lie about as you realize you are near the scientist or his ultimate creation, which will grant the following...

See also Mad Scientist, For Science!. Also overlaps with Abandoned Hospital in some cases, with the hospital residents being used as test subjects.

Exploring an abandoned Cerberus research facility on Horizon, Shepard finds the place was studying a means of controlling the Reapers, even converting innocent refugees into Husks. Unfortunately, it turns out the place was abandoned with very good reason...

Exploring an abandoned Cerberus research facility on Horizon, Shepard finds the place was studying a means of controlling the Reapers, even converting innocent refugees into Husks. Unfortunately, it turns out the place was abandoned with very good reason...