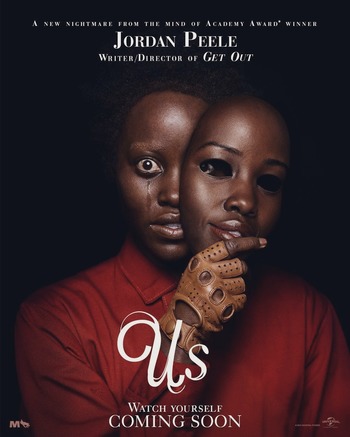 We are our own worst enemy.
"They look exactly like us. They think like us. They know where we are."
— Adelaide Wilson
Advertisement:

Us is a 2019 horror film written and directed by Jordan Peele, and his second film after 2017's Get Out. It stars Lupita Nyong'o, Winston Duke, Shahadi Wright Joseph, and Evan Alex, with Elisabeth Moss and Tim Heidecker in supporting roles.

Married couple Adelaide and Gabe Wilson (Nyong'o and Duke) decide to take their children Zora and Jason (Joseph and Alex) on vacation to a beach house to unplug with their family friends, Kitty and Josh Tyler (Moss and Heidecker). Meanwhile, Adelaide is plagued with an unexplainable trauma from her past which keeps her on edge.

Unfortunately, the Wilsons' serenity doesn't last. On the first night of their arrival, they see a group of uninvited guests standing on their driveway who then break into their house. It is then revealed that the Wilsons and their intruders share both a deep connection and unfinished business, turning a peaceful vacation into a chaotic fight for survival.

Us contains examples of: