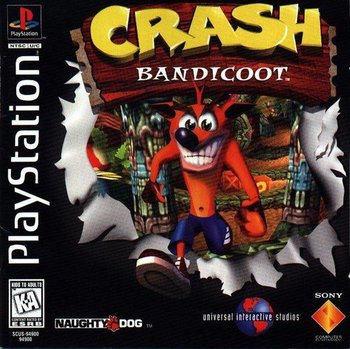 It all has to start somewhere...
Advertisement:

In an effort to create a bunch of anthropomorphic, hyper-intelligent animals to serve as an army to lead them to world domination, Dr. Neo Cortex and Dr. Nitrus Brio create the Evolv-O-Ray, a device that can mutate any animal into a super-strong, hyper-intelligent warrior, and the Cortex Vortex, a brain manipulation device that can make anyone and anything a blind follower of Cortex's orders. One of their first experiments with the Evolv-O-Ray is Crash, a bandicoot snatched from the local island wilderness and chosen to serve as the leader of Cortex's army. However, the Cortex Vortex fails on Crash, and he escapes through a window while Cortex and Brio prepare to experiment on Crash's love interest, Tawna. The next day, Crash washes up on the shores of N. Sanity Beach and vows to defeat Cortex and rescue Tawna from his fortress, with the help of a native mask spirit named Aku Aku who wants Crash to take down Cortex so he'll stop polluting the islands.

So begins Crash Bandicoot for the Sony PlayStation, which is the very first game in the series. The goal is simple: Destroy crates and defeat enemies as you reach your goal. If you break enough crates, you'll earn a Gem in each level. Getting a certain amount of clear gems will earn you the 100% Completion ending. This game also has some Early Installment Weirdness as there's no sliding, belly-flopping or Coco. Just traditional spinning, Goomba Stomping and Crash's girlfriend, Tawna. Aside from the main levels, there are also Bonus Stages and boss fights, some of which can be real challenging unless you got pure gamer skills.

This game, along with Cortex Strikes Back and Warped, were remastered on the PlayStation 4, Nintendo Switch, Xbox One and PC with updated graphics and new features, as part of the Crash Bandicoot N. Sane Trilogy.