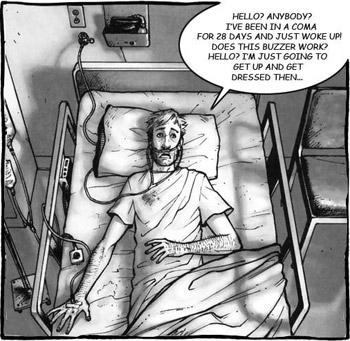 "Am I late to the apocalypse?"
The world of video games probably has special "Sorry to hear you woke up in an abandoned asylum" greeting cards it happens so bloody often.
— Zero Punctuation reviewing Get Even
Advertisement:

An Abandoned Hospital Awakening is, as the name implies, when a character wakes up in an Abandoned Hospital. A combination of several different things in a single convenient package, an abandoned hospital awakening is a popular choice for beginning Horror works, though it shows up in other genres and contexts as well. The hospital used for this has usually been recently abandoned after a disaster of some sort, which helps explain why the character was there in the first place (though not necessarily why they were left behind).

Abandoned hospitals are creepy, which sets the tone by itself, but the addition of specific types of Scenery Gorn can ratchet that tension up even further. At the same time, it gives the characters (and the audience) a clue as to why the hospital was abandoned in the first place. Being in a Convenient Coma while the disaster was happening gives them an excuse to be Late to the Tragedy (in some cases finding they have Slept Through the Apocalypse), making them a Naïve Newcomer until they figure things out. If they don't remember why they were in the hospital in the first place, then you've got an Ontological Mystery on your hands in addition to dealing with more immediate problems.

Especially popular during a Zombie Apocalypse, for some reason. See Abandoned Hospital for the supertrope. See Waking Up Elsewhere in general.

open/close all folders
Anime and Manga
Comics
Film
Advertisement:
Literature
Live Action TV
Music
Video Games
Webcomics
Awful Hospital: Fern's awakening at the start of the comic resembles this, but the Hospital is anything but abandoned.
Web Original
Western Animation