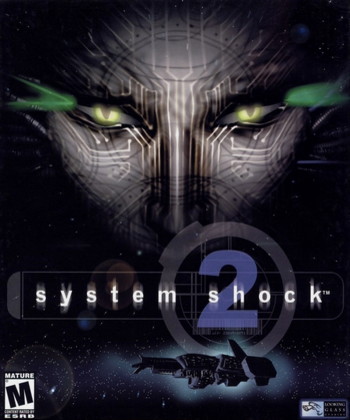 System Shock 2 is a First-Person Shooter/Immersive Sim with Survival Horror and RPG Elements and the sequel to System Shock. It was developed by Looking Glass Studios and Irrational Games, and published by Electronic Arts, releasing in August 11, 1999.
Advertisement:

The game is set 42 years after the first game; due to the events of the first game, anti-Mega-Corp outrage resulted in formation of Unified National Nominate, the quasi-socialist world government. After UNN (albeit under TriOptimum grant) scientist Marie Delacroix discovers the secret of faster than light travel, UNN and TriOptimum mount a joint mission to Tau Ceti.

The game involves the maiden voyage of the Von Braun, the first ship with FTL Travel equipped, accompanied by the UNN Rickenbacker. The game begins with the awakening of the player character, a cybernetically-enhanced soldier, from cryosleep to receive a small amount of exposition from a voice identified as a surviving member of the Von Braun's crew, and then immediately has to escape his sick room that has been exposed to space, beginning his long adventure in avoiding his own death.

The game received critical acclaim, but was a commercial failure due to going up against the equally groundbreaking Half-Life. A third game was briefly rumored with a 2006 trademark renewal and claims by PC Gamer UK, then disappeared. The game remained influential, and spawned many a Spiritual Successor, with Deus Ex, BioShock, Dead Space, and Prey being the most notable examples.

that went unsolved for around a decade, Nightdive Studios acquired the Digital Distribution rights to System Shock 2 and had it released on GOG.com, and thanks to an agreement between them and Valve, it is also on Steam. After Nightdive acquired the right to the IP and began working on a remake for the first game, they got Otherside Entertainment, composed of ex-Looking Glass developers, to develop a third game. The game was initially to be published by Starbreeze Studios, but the company later got into severe financial troubles after Overkill's The Walking Dead flopped and was forced to sell publishing rights for the game back to Otherside in Febuary 2019

Example of:
Call a Human a "Meatbag"