Manga / The Demon Girl Next Door 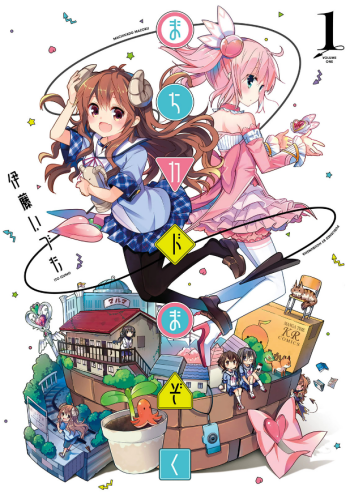 Yuko Yoshida is just your average, ordinary teenage girl. She goes to school and tries not to flunk out, plays video games bought from the local bargain bin because of her family's crippling poverty, and spends time with her mother and sister while she waits for her father to come home...from his job catching squid on a nuclear-powered submarine, according to her mother. Though Yuko may be poor, malnourished, and wracked by childhood illnesses, she puts on a brave smile every day and tries to do her best.

Then, one fateful morning, she wakes up and finds she's sprouted goat horns and a pointy tail overnight.

At that point, her mother reveals the Yoshida household comes from a line of demons. But millennia of defeat at the hands of the Light Clan's warrior-priestesses, known in the modern age as "magical girls", have stripped the demons of their demonic appearance, powers, and prosperity, while cursing them to scrape by on only 40,000 yen a month. Now that Yuko has awakened to her demonic nature, her mother tasks her with defeating their mortal enemies and breaking their family's curse so they can enjoy the kind of fine dining you only get at family restaurants.

Unfortunately, the only weapon her mother can provide is a fork.*  Since she's a thoughtful, loving mother, she also wraps it in plastic and puts it in a cutesy carrying case along with a wet nap and packet of sauce.

Finding the small, sickly, none-too-smart Yuko no threat whatsoever, Momo rebuffs the fledgling demon lord's every attempt to do battle with mind games a five-year-old could see through. Yet the jaded, cynical magical girl finds her life brightening up every time Yuko darkens her doorstep. As the two of them unravel the secrets behind their little street corner and the mysteries that bind them together, they quickly go from sworn enemies to best frenemies.

The Demon Girl Next Door (Machikado Mazoku, or "Street Corner Demon") is a yonkoma Perspective Flip of the Magical Girl genre by Izumo Ito. The manga has been serialized in Manga Time Kirara Caret since 2014, and an anime adaptation by JC Staff aired in July 2019 with a second season following in April 2022.

The manga is being translated into English by Seven Seas Entertainment starting January 2021, and the anime is licensed for home video release outside of Asia by Sentai Filmworks as well as being streamed on its HiDive service.

The Demon Girl Next Door contains examples of: