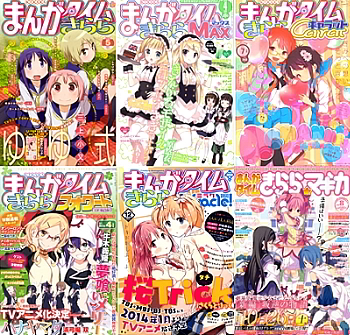 It was started in 2003 as an offshoot of the Gag Series magazine Manga Time, but specializing in moe yonkoma. Because of the popularity of the moe style in the 2000s, Kirara became a family of four magazines (five before October 2017), three (plus the one cancelled magazine) of which continues with the original specialization of moe Slice of Life yonkoma. The other one, Manga Time Kirara Forward, while maintaining the moe style, serializes non-yonkoma series with more traditional narratives — for example, Dream Eater Merry is a supernatural action series that wouldn't be too out of place in a shounen mag like Shonen Sunday.

The Kirara family of magazines have also become somewhat infamous for carrying works with high levels of Homoerotic Subtext, or in some cases out-and-out seinen Yuri Genre series, Sakura Trick being one of the biggest examples that got an anime. Though in most of the 2010s, it seems at least one manga from the Manga Time Kirara family gets adapted into an anime nearly each season, sometimes more than one. It is common enough that Moe Slice of Life comedies get called "Kirara-esque" even if they are not from a Kirara manga.

Many of their anime adaptations are licensed by Sentai Filmworks for North American viewers, and some have also received English dubs, such as Kill Me Baby, Dream Eater Merry, and Hanayamata.

In addition, because of the format, each monthly release of one of the five magazines under the family can carry up to 26-27 series per issue. Works in these magazines are often authored by novices of professional manga; many of them were (or still are) doujinshi authors or illustrators.

In December 2017 Aniplex launched Kirara Fantasia, a Massive Multiplayer Crossover smartphone game which transports numerous characters from various Kirara properties into a fantasy setting. The game is currently only available in Japan.

Tropes pertaining to the Manga Time Kirara family itself