Manga / Diary of Our Days at the Breakwater 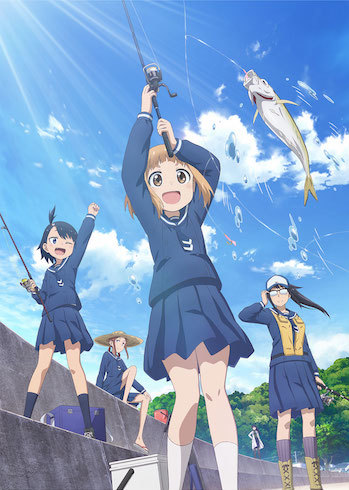 Diary of Our Days at the Breakwater (Houkago Teibo Nisshi, literally "Afterschool Embankment Journal") is a Slice of Life Four-Girl Ensemble manga about recreational fishing. Written and illustrated by Yasuyuki Kosaka, the manga began serialisation in Februrary 2017 in Young Champion Retsu magazine. Because of flooding in Kosaka's area, it was announced that the manga would go on a brief hiatus in July 2020. While the manga continued subsequently, a second delay was announced, with the manga going on a hiatus starting December 2020. Diary of Our Days at the Breakwater received an anime adaptation in April 2020, which was produced by Dogakobo and' is licensed by Funimation. During its airing, the COVID-19 pandemic resulted in delays to its production. After episode three aired on April 15, the series was put on hold until July. The first three episodes were re-broadcast starting July 1, and the fourth episode aired on July 28.

After moving to the seaside town she had visited in her childhood, Hina Tsurugi looks forwards to a peaceful life in high school, where she intends to join the Handicrafts Club and make new friends. While exploring the town prior to the start of term, she encounters an older girl who appears to be suffering from heat stroke. Upon closer inspection, it turns out the older girl had actually been fishing. She introduces herself as Yūki Kuroiwa, and invites Hina to give fishing a go. When Hina unintentionally catches an octopus, Yūki sees an opportunity to strong-arm Hina into joining the Breakwater Club, which focuses on fishing. While Hina initially is reluctant to join the Breakwater Club, she learns that her childhood friend, Natsumi Hodaka, is also attending the same high school and is convinced to at least giving fishing a chance before deciding which club to join. Along with the quiet but knowledgable Makoto Ōno, Hina discovers that fishing is remarkably fun, learning how to catch everything from Horse Mackerel Fry to Whiting with her newfound friends. From selecting the right equipment, to preparing their catch for consumption, Hina becomes enthralled and slowly begins to overcome her fear of aquatic life as she becomes accustomed to the eccentric, but exciting Breakwater Club.

Diary of Our Days at the Breakwater provides examples of:

An event so embarrassing it's repeated three times.

Alternative Title(s): Houkago Teibo Nisshi, Diary Of Our Days At The Breakwater

An event so embarrassing it's repeated three times.