Manga / A Destructive God Sits Next To Me 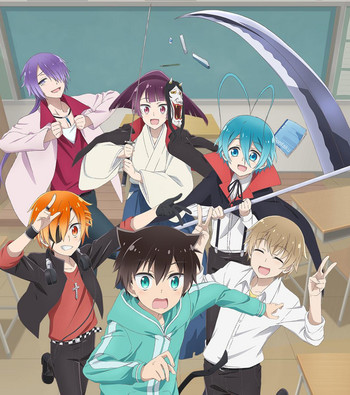 Koyuki doesn't want them to put the 'slice' in his Slice of Life.
Advertisement:

A Destructive God Sits Next to Me (Boku no Tonari ni Ankoku Hakaishin ga Imasu) is a comedy Shōjo manga by Arata Aki that was serialized in Comic Gene from 2013 to 2020. It was adapted into a 12 episode anime by EMT Squared for the Winter 2020 season.

The series follows the misadventures of Seri Koyuki, a catlike high schooler who just wants to be left to study in peace but keeps getting annoyed by his classmate, Kabuto Hanadori, who claims to be the reincarnation of a knight sworn to defend the world from some unspecified evil, and insists Koyuki is the reincarnation of his former partner.

A Destructive God Sits Next to Me provides examples of: