Manga / A Devil and Her Love Song 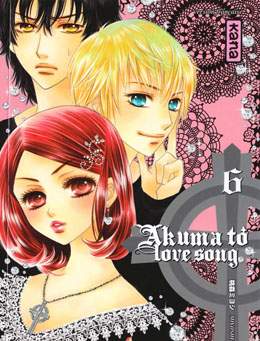 A Devil and Her Love Song (Akuma to Love Song in Japanese) is a shojo manga series created by Miyoshi Tomori.

The story revolves around an unusual and shockingly beautiful girl named Kawai Maria who was expelled from her previous school for "violence against a teacher", and soon transfers to Touzuka High School, a public school with low standards. Her sharp tongue and straightforward personality often leads everyone else to hate her with the exception of two boys, Shin Meguro & Yuusuke Kanda, who eventually get involved with her. With a devil's aura like hers and an arrogant facade to pair it up with, it's just too hard to be understood. And so Maria needs to deal with bullying, adjusting, fitting in and romance.

The series was published from 2007 to 2011 in Japan in the bimonthly Margaret magazine, compiled in a total of 13 volumes. In the US, it is being licensed and translated by Viz Media. It's also available in Spain and France.