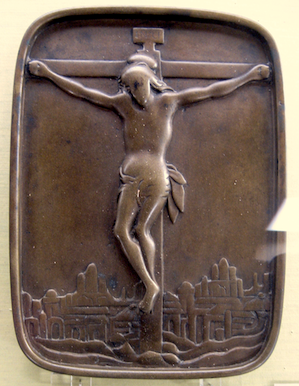 A fumi-e stone. 17th-century Japanese Christians (or suspects of being Christian) were forced to trample them to abjure their faith or prove they were not Christians.
Shirou: So what the hell is a big-ass church doing all the way out here? Isn’t only like two percent of Japan Christian anyway?
Rin: Yes, and it just so happens that he and I each make up a percent. Well, three percent if you count Saber. So hell if I know where he gets his money from.
— Fate/stay night Abridged
Advertisement:

Christianity is rare enough in Japan that a character being explicitly labeled as such is rather unusualnote How unusual? There are only 1-2 million Christians in Japan, comprising a very small fraction of the population (1.5 percent). This was not always the case. During the first decades of the Kingdom of Portugal's trade with the Japanese islands, there was a fairly substantial Christian base. The first Jesuit mission to Japan started evangelizing the region in 1548, and by 1589 there were about 200,000 Japanese Christians (amongst a total population of no more than twenty-four million). This was probably the largest overseas Christian community (yes, even more than China or Latin America, despite the substantially higher monetary investment and slight head-start in the latter region) and was unique in that it was mostly staffed and run by ethnic Japanese.

This was partly because of pre-Tridentine Catholic practice, which was lax and didn't care much for orthodoxy (the priority was on conversion), and Japan's cultural-religious tradition. Like Taoism or Hinduism, Shinto is a polytheistic system of belief without set doctrines or leadership, and is home to several different schools of both. Buddhism, for instance, was almost seamlessly integrated into Shinto within just a century or two of its arrival in the Japanese Islands (at least partly because Orthodox [Chinese-style] Buddhism was regarded with suspicion and semi-exterminated). Today, many Buddhist temples coexist with Shinto shrines, and many Japanese people practice both Shinto and Buddhist rituals. The phenomenon of Japanese "martial" Shinto-Buddhism is quite notable in comparison to the pacifistic Indo-Chinese strains of Buddhism. The former arguably — fused with a twisted form of neo-Bushido doctrine — saw something of an apotheosis in the Tokubetsu Kogeki/"Special Attack" units of the final, desperate months of the military's period in power.

Christianity, however, was increasingly seen as a threat to the existing social order. Christians were harshly persecuted during the Edo period (the early 1600s) and driven underground out of fear that Japanese peasants and samurai would feel more loyal to a foreign Pope than their own lord. This was exacerbated by the Protestant Dutch, who hoped to undermine their trade rivals by spreading rumors of Portugal's previous conquests. The fact that the King of Portugal actually asked the priests about the feasibility of an invasion of Japan probably didn't help. Neither did their numerous military activities and the destruction of Shinto shrines and Buddhist temples. What followed was a bloodbath, with all priests (Portuguese or otherwise) being expelled or crucified (and yes, they did do that on purpose). Converts were hunted (one practice being that soldiers would go to villages and demand they stomp on a fumi-e, a picture of Jesus or Mary — any which showed hesitation were branded Christians) and sent to Nagasaki to be tortured. If they refused to recant, they were also crucified.

The surviving underground religion became greatly influenced by Buddhism, Taoism, and Shinto. In modern days, with the advent of globalization and the reopening of Japan, it's no surprise that most major Christian sects have a presence (if small) in Japan, although in times of political turmoil they are still often subjected to distrust and persecution, especially churches like the Anglicans and Baptists with ties to foreign countries. This was particularly the case during late Imperial Japan, when the Japanese government tried to nationalize the country's Protestant sects into a single church, the United Church of Christ in Japan (Nihon Kirisuto Kyōdan). Those priests and their followers who refused to cooperate were imprisoned by the government during World War II. Allied bombings further devastated the community, destroying much of the country's churches and cathedrals.

After the war, the Kyōdan allowed other Protestant sects to break off and reform their prewar organizations, and apologized for and disavowed its role in their persecution. It still remains the largest Protestant sect in Japan with 200,000 followers, although groups like the Anglican Episcopal Church in Japan (Nippon Sei Ko Kai) and the Japan Baptist Convention (Nippon Baputesuto Renmei) retain respectable congregations. Even so, Catholics remain by far the largest Christian group with an estimated 440,000 followers in 2014. Today, although Japanese Christians are still very much in the minority, the religion is generally more tolerated than has traditionally been the case.

Nowadays, if a Japanese Christian does appear in anime and manga or even Western media they will typically be from Kyushu especially Nagasaki which has a historically significant Catholic population or occasionally another area like Tokyo.

Note: This page is for actual Christianity and its followers in Japan. No Fantasy Counterpart Culture, no Crystal Dragon Jesus. For the sake of keeping things simple, Mormons count as Christians on this page. The same goes with other Abrahamic religions like Judaism and Islam.

The Other Wiki's page on the matter. See also the Sengoku Period.