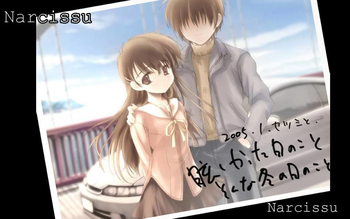 This is the story
of a girl whose heart was standing still
and a boy whose breath was being stolen away,
both of whom die.
Advertisement:

The protagonist, suffering from a terminal disease (identified by the official English site as lung carcinoma), was moved into hospice in the 7th floor of a hospital, where he will be cured, supposedly. Until he met Setsumi, a girl also suffering from an unknown terminal disease, who told him otherwise: this is the place where you are left to live and die. It's the prison. You either die there or at home, no exceptions. He started to talk to her, and with that, he thinks that both him and her don't want to die either there or at home. Driven by the pictures of Narcissus, they decided to steal the protagonist's parent's car and escape, to Awaji Island, to see the flowers...

There is also a prequel called Narcissu -side 2nd- set about six to seven years before Narcissu, which tells the story of Himeko, a cheerful former 7th floor helper who unexpectedly becomes a patient at the same floor she volunteered to help. Set in a summer day, when Setsumi, currently a regular outpatient of the hospital, went for regular check-up, meets Himeko, and their story begins there. The English translation was originally released on March 31st, 2010 after turbulent development.

A third game, Narcissu 3rd -Die Dritte Welt-, is a compilation of several stories set in the same world. Unlike previous works in the series (disregarding prior released supplementary material), it is a commercial release.

An omnibus edition of all three games, Narcissu -moshimo ashita ga aru nara-, has been released for the PSP, containing extra content.

was announced and funded by Kickstarter. Along with the first two games, it contains three new stories set in the same universe, along with the one story from Die Dritte Welt that Kataoka himself penned (the rest being written by guest authors and are currently unable to brought on due to licensing reasons). It was released on Steam a year later, and can be found here