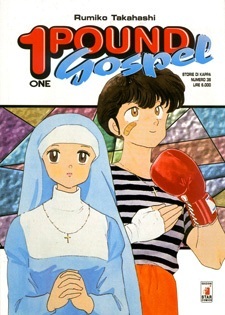 A manga and OVA series by Rumiko Takahashi, One Pound Gospel is one of her shorter and less-known works. It was published sporadically from 1987 to 2006 in Weekly Young Sunday and collected into four volumes from 1989 to 2007.

The plot concerns Kosaku Hatanaka, a 19-year-old boxer who used to be a rising star that started boxing straight out of high school, but by the beginning has deteriorated into a lost case by anyone's opinion, due to his uncontrollable eating habits. Only his coach believes he might yet turn out well, though even he doesn't consider the chance large. However, Kosaku gets new motivation in the form of Sister Angela, a Christian nun to whom he went for confession and keeps doing so just for the chance to see her. Angela is a novice, not yet a full nun, having given up her privileged birth for the veil. However, she finds herself not entirely unsympathetic towards Kosaku, who doesn't fully understand the vows she is to take. He often desperately tries to impress her with a victory so that she would consent to be his girlfriend - much to the irritation of the Mother Superior of Angela's convent.

Although One Pound Gospel is a charming entirely realistic (a rarity for the mangaka) comedy, it tends to be overlooked in favor of Maison Ikkoku, which is both longer and contains stronger distinct personalities among its protagonists. Also, as boxing and the Christian faith is an integral part of the series, this isn't to everyone's taste. However, the result is a pleasing mix of near-shonen fights and the traditional romance, this time - another rarity - with an actual resolution to the couple's UST.