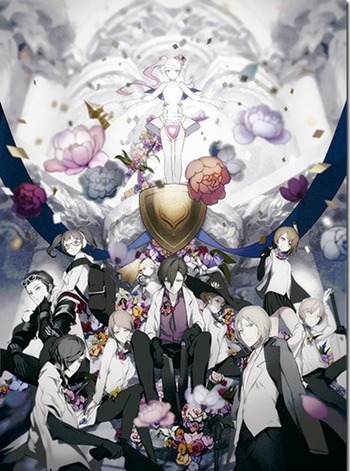 The Caligula Effect (known simply as Caligula in Japan) is an RPG for the Playstation Vita, developed by Aquria and published by FuRyu. It was released in Japan on June 23, 2016, in North America on May 2, 2017, and in Europe on May 9, 2017. It was localized by Atlus.

The vocal software known as μ has enabled people to escape from the despair of reality by listening to her song; those who are "saved" by listening to her are granted their every wish through Mobius. In the virtual world of Mobius, everyone is an ideal high school student at Kishimai High School in the idyllic Miyabi City, repeatedly reliving high school days, blissfully unaware that they are not in reality. A small group of men and women figure out that Mobius is not the real world, and form the "Go-Home Club" in order to find a way back to reality. Each one of them has violated certain taboos, and each one has dark secrets...

However, their desire to escape does not go unnoticed. The Ostinato Musicians, eight composers who provide music for μ (the music itself being composed by actual musicians popular on websites like Nico Nico Douga), oppose the Going-Home Club for disrupting the order.

Each member of the Going-Home Club fights using the "Catharsis Effect", a black mass that erupts out of them and forms into weapons and accessories that represent each member's true self; it also seems to cause parts of their personality that are normally repressed to come to the surface.

But perhaps the game's biggest claim to fame is that it is written by Tadashi Satomi, the father of the Persona series.

A spin-off novel titled Caligula EPISODE: Marie Mizuguchi ~Kanojo no mita Sekai~ note The World She Saw was released on October 15, 2016. It's written by Ryouko Seki, of Trillion: God of Destruction fame.

An Updated Re-release, The Caligula Effect: Overdose, was announced for a May 17, 2018 release on the PlayStation 4 in Japan, featuring an expanded story, new allies and enemies, a selectable female protagonist, and the ability to side with the Ostinato Musicians, developed by Historia instead of Aquria. Overdose was announced to be coming to not only PS4 in America, but also to the Nintendo Switch and PC (on both Steam and GOG), localized by NIS America, slated for release in March 2019 (the 12th in North America, and the 15th in Europe). A 12-Episode Anime adaptation by Satelight aired in the Spring 2018 season.

A sequel, currently called The Caligula Effect 2, has been announced for Playstation 4 and Nintendo Switch, with a June 24, 2021 release date set for Japan.

Not to be confused with The Caligula or the emperor, film, or comic book of the same name.