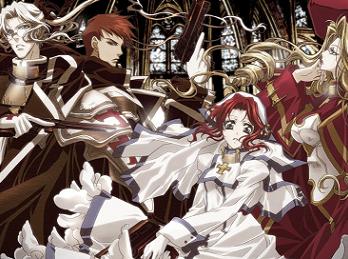 So you are watching an anime and here comes a 12-year-old boy in some interesting, religious-looking robes and...wait, this pre-teen is supposed to be a Catholic priest? But, 12-year-olds can't be priests! That isn't typical Catholic priestly attire, either, that robe looks like it's made of 100% pure awesome, and... oh look, he's pulling out guns and shooting up a demon. And there's a hot, glasses-wearing nun sidekick casting magic spells.

Well, there really is no explanation other than you've just seen a case of Anime Catholicism.

If you know anything remotely about Catholicism, or western religions in general, then when this trope shows up, you'll know it. Suddenly every priest will be a badass, the clergy will be completely populated by hot, young men and everything about the structure, hierarchy, history or religious beliefs will obviously be completely wrong to even people who aren't Catholic and are only peripherally aware of what the Catholic Church is about.

Since Japan (and other countries that produce derivative media, such as China), don't have a large population of Christians, local audiences don't especially know nor care a great deal about the total accuracy in the depiction of the Church or Church-based organizations in their writing. At the same time, their cultures do have some exposure to Christianity especially Catholicism, which is more than can be said about many other foreign religions. As such, Catholicism has just the right mix of exotic symbolism that can still be recognized as Catholic symbolism by the target audience while still coming across as foreign and interesting. When it shows up, the Church is predominantly there to provide a sense of magic or mystery (the beautiful Catholic architecture is also a plus) to the setting or backdrop of the story, with priests more akin to wizards or mages and the importance of correctness being secondary, and more than likely not even factor into their priorities.

Here are some common elements Anime Catholicism tends to use to "spice up" actual Catholicism:

Basically the bottom line is that the Rule of Cool, Rule of Sexy or any of the other "Rules" often trump accuracy in how the church is depicted. Keep in mind most of this is also applicable to Crystal Dragon Jesus versions in Fantasy Anime and Manga. This Trope has nothing directly to do with Kirisuto-kyō sects but may intersect it.