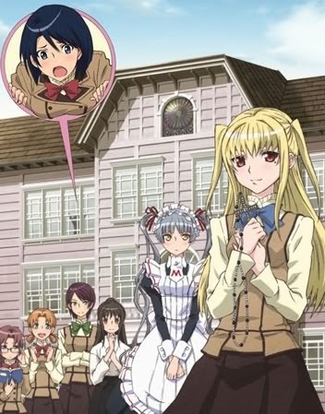 Kanako Miyamae Does Not Like Men, to the point of breaking out in hives when she comes in contact with them. Hoping to find her true (female) love interest, she attends Ame no Kisaki Girls' School where her parents met. Except she missed the school and wandered onto a private estate. As if fate had led her there, she sees a perfect girl before her and falls in love at first sight.

Fate really enjoys toying with people. Mariya Shidou, her perfect girl, is actually a boy in disguise, the grandson of the school's ex-chairwoman, and is one hell of a dick. In order to keep herself from being kicked out of the school, Kanako is forced to cooperate with Mariya against her will.

Maria†Holic is a seinen manga by Minari Endou, which ran in Monthly Comic Alive from 2006 to 2014. It was adapted into an anime for the early 2009 season by Studio Shaft, which means another layer of randomness is added to what's already there. Sentai Filmworks licensed the anime for release in February 2010, while Tokyopop released the manga in English. A second season of the anime

aired as part of the Spring 2011 anime season.

Initially released sub-only by Sentai Filmworks in 2010, it got an all new English Dub in January 2014 (featuring Monica Rial and Jessica Calvello working together for the first time since Excel Saga, 11 years earlier).

Compare and contrast: Otoboku - Maidens Are Falling For Me and The Beautiful Skies of Houou High. Has nothing to do with ×××HOLiC.