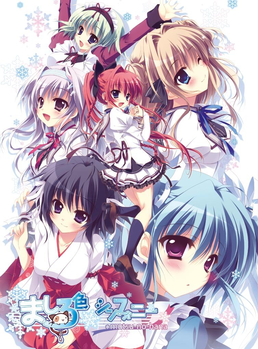 Kagami Academy and Yuijo Girls' Academy are merging thanks to financial troubles in their district. It's at this point that we meet Shingo Uryuu and his little sister, among the students from Kagami joining in the merger. While searching for his sister, Shingo runs into Airi Sena. Little does he know that she's attending Yuijo, and against the merger. Now, Shingo will meet new classmates and have new adventures, and maybe fall in love.

Mashiro-iro Symphony -Love is pure white-, originally a Visual Novel by Palette, was adapted into a Fall 2011 12-Episode Anime by Manglobe and is currently being simulcast.

Viewers living in the US may watch the show legally at Crunchyroll.

Tropes in Mashiro-iro Symphony include: