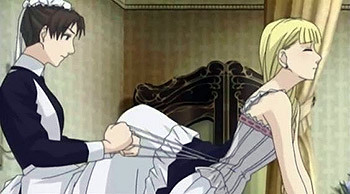 Of Corsets Sexy... but there's a price.
Pirate: I'm gonna teach you the meaning of pain!
Elizabeth: You like pain? [thwack] Try wearing a corset.
— Pirates of the Caribbean: The Curse of the Black Pearl
Advertisement:

Corsets can be painful. Squeezing four or more inches from your waist in order to get that perfect figure? Dear god, woman, that must be torture—however will you be able to breathe? This perception has been carried into fiction: if corsetry is mentioned in a period drama, it is often in the form of a woman's complaint about the pain caused by being squeezed—usually against her will—into the garment.

The trope is older than radio, as a lot of literature—some medically sound, most not, and much of it seemingly intended to titillate—was produced in the nineteenth century regarding the dangers of corset-wearing and tightlacing, and the perceptions of garments as dangerous inevitably made their way to fiction. Later, after corsets stopped being ubiquitous, works featuring the garments, while not necessarily portraying them as deadly or even dangerous, would often present them as something to be endured for vanity; it is during this period that some of the most enduring images of corsets, such as that of Scarlett O'Hara doing anything for an 18.5-inch waist, were created. More recently, creators have taken to using the physical constriction provided by corsets as an allegory for the societal constriction women faced in the past; when a woman complains about her stays, she's actually complaining about how she's oppressed by society's norms. It's a common complaint of the Spirited Young Lady.

As for how much of the discomfort attributed to corsets is Truth in Television, the answer to that depends on a lot of different factors, including the corset itself, the person wearing it, and the circumstances under which they do so. While it is quite possible to comfortably wear tight corsets for extended periods, and there are plenty of people who regularly do so, there are also plenty of other people who do not speak of the experience positively, helping keep this trope alive.

Can often overlap with Of Corsets Funny. See also Of Corsets Sexy, for a more general overview on the garment's use, and Fashion Hurts, for other kinds of clothing-related pain. Compare to Hates Wearing Dresses.

The Latest Fashion in London

Women in London must have learned not to breathe.

The Latest Fashion in London

Women in London must have learned not to breathe.