Film / All About Eve 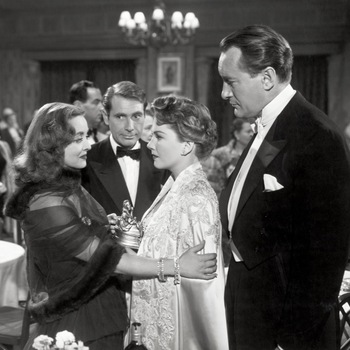 "Fasten your seatbelts, it's going to be a bumpy night."
— Margo Channing
Advertisement:

All About Eve is a 1950 American drama film, written and directed by Joseph L. Mankiewicz and released by 20th Century Fox. It is based on the 1946 short story "The Wisdom of Eve" by Mary Orr.

The costumes were by famed Hollywood designer Edith Head and the film score was by Alfred Newman (not that Alfred Newman!). Marilyn Monroe appears in a small early role.

All About Eve was nominated for fourteen Academy Awards (including a whopping four nominations just for the actresses) and won six, including Best Picture, Best Director, Best Screenplay, Best Supporting Actor (George Sanders), Best Costume Design for a Black-and-White film (Edith Head and Charles Le Maire), and Best Sound Recording. This is still the record for nominations, tied with Titanic (1997) and La La Land.