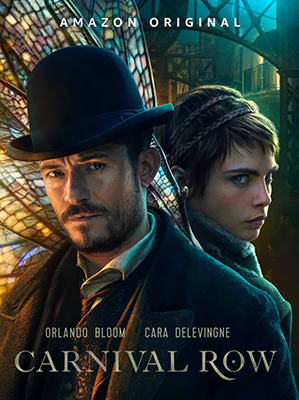 Carnival Row is a Prime Video series created in 2019. It stars Orlando Bloom (who is also a producer) and Cara Delevingne in the leading roles, and was also produced by René Echevarria, Travis Beacham, Marc Guggenheim and Jon Amiel.

The story is based in a Victorianesque fantasy world filled with mythological immigrant creatures, whose rich homelands were invaded by the empires of man. This growing immigrant population struggles to coexist with humans in the grimiest section of The Burgue, capital city of the human Republic — forbidden to live, love, or fly with freedom.

But even in darkness, hope lives, as a human detective, Rycroft Philostrate, and a refugee faerie named Vignette Stonemoss rekindle a dangerous affair despite an increasingly intolerant society. Vignette harbors a secret that endangers Philo's standing during his most important case yet: a string of gruesome murders threatening the uneasy peace of the Row. As Philo investigates, he reveals a monster no one could imagine lurks in the depths of The Burgue.

The first season of eight episodes premiered on August 30 2019, and a second and final season will be released on February 17, 2023. Two Prequel Comic Book one-shots, Carnival Row: From The Dark and Carnival Row: Sparrowhawk were also published in August 2019 by Legendary Comics. These one-shots, along with several other stories, will be printed in a collection titled Tales of Carnival Row, scheduled for release in January 2023.

A Prequel audio novella titled Tangle in the Dark was written by Stephanie K. Smith, read by Karla Crome, and released in 2019. It covers the Tourmaline and Vignette's first meeting as university students, their romance and breakup, and the beginning of the war in Tirnanoc.

Nerdist created the Carnival Row: Role Playing Guide world guide and setting book for the Cypher System which was made available to download

. A sample adventure was run by Travis Beacham called "The Heist on the Row

" with the Geek & Sundry team.