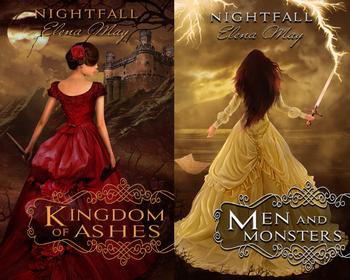 Was she forgetting what it meant to be human?
Advertisement:

Nightfall is a young adult dystopian fantasy series by Elena May. Set in a post-apocalyptic future, the books combine elements of science fiction, medieval history, and classical vampire mythology with a twist.

Myra never witnessed the Nightfall. She has only heard stories from the eldest among them; tales of the Old World and of the scientists who invented the Weather Wizard—a technological innovation that controls the weather. Unfortunately, the device also gave an ambitious vampire prince the means to cover the world in impenetrable clouds, allowing his armies to crawl out of their caves and conquer all.

Vampires rule over the New World, breeding humans for food. After fifty years of guerrilla warfare, the Resistance is fading, its supplies dwindling. They must rally and succeed—and soon—or all hope of restoring human civilization will be lost.

When Myra goes on a desperate mission to help the Resistance, she ends up a captive in the vampires’ palace. With time running out, she must find a way to stop Prince Vladimir, and every wrong step leads to the death of innocents. Her battle abilities prove useless, but Myra discovers she has another skill that can give her an edge over her captors. Now, Myra must defeat the vampire leader at a power game he has been playing for almost two millennia.

Not to be confused with the in-universe Twilight parody franchise in Little Witch Academia, also named night fall (but usually in lowercase, like so), of which Lotte, one of the main characters, is a huge fan.

Kingdom of Ashes provides examples of: